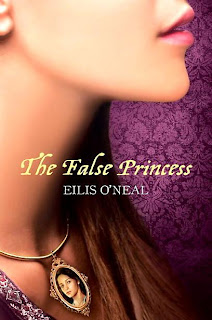 Summary:
From the inside cover:
Princess and heir to the throne of Thorvaldor, Nalia has led a privileged life at court. But everything changes when she learns, just after her sixteenth birthday, that she is a false princess, a stand-in for the real Nalia, who has been hidden away for her protection. Cast out with little more than the clothes on her back, the girl now called Sinda must leave behind the city, her best friend, Kiernan, and the only life she’s ever known.

Sent to live with her only surviving relative, a cold, scornful woman with little patience for her newfound niece, Sinda proves inept at even the simplest tasks. Then she discovers that magic runs through her veins – long-suppressed, dangerous magic that she must learn to control – and she realizes that she will never learn to be just a simple village girl.

Sinda returns to the city to seek answers. Instead, she rediscovers the boy who refused to forsake her, and uncovers a secret that could change the course of Thorvaldor’s history, forever.

Review:
I came across this a few months back and decided to give it a go, especially since YA fantasy tends to surprise me sometimes (in a good way). The False Princess isn't a book I went nuts over, but it wasn't horrible and I quite enjoyed it.

Nalia is Thorvaldor's princess, but just after her sixteenth birthday, her parents reveal that she isn't really Nalia at all. She is Sinda, taken as an infant to replace the real Nalia because of suspected attempts on her life due to a prophecy. The real princess has been raised in a convent without any clue as to her real heritage, the same situation Sinda now finds herself in. Brutally dismissed by the King and Queen, Sinda is sent to live with her aunt, who isn't exactly warm and fuzzy herself. When Sinda's long sealed magical ability comes out with a vengeance, she travels back to the city to seek guidance in how to control the magic that frightens her. Afterwards, she uncovers a conspiracy that only she and her friend Kiernan are privy to, and thus set out to set things right.

The False Princess had a bit of everything: magic, adventure, romance, traipsing about in libraries, oracles, you name it. The plot started off really well and grabbed me right away. The little suspenseful twists were well done too, I wasn't expecting them. The plot started to lag towards the climax, which was a drag, but the ending was satisfying enough that I can overlook it. I wish the author had spent more time on the magic in this universe, it kinda came out of left field all at once like "oh yeah, did we mention the random magic we have here?" kind of thing. I liked Sinda and Kiernan, they had completely opposite personalities that bounced off each other well, and although Kiernan was a bit of a playboy, it wasn't to the point where he was an obnoxious ass, and he's so devoted to Sinda that you just find him sweet. It was an entertaining novel, but just didn't have that little extra push that makes me fall in love with a story.

Recommendation:
A very well put-together fantasy story with something for everyone. Not astounding, but still worth the read.

Thoughts on the cover:
I can't figure out if the girl is Sinda or if Sinda is the image in the locket....slightly confusing. I like the colour scheme of gold and purples though.
Posted by Andrea at 4:22 PM