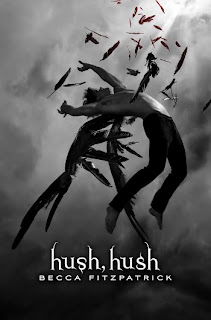 Summary:
From the inside cover:
Romance was not part of Nora Grey's plan. She's never been particularly attracted to the boys at her school, no matter how hard her best friend, Vee, pushes them at her. Not until Patch comes along. With his easy smile and eyes that seem to see inside her, Patch draws Nora to him against her better judgment.

But after a series of terrifying encounters, Nora's not sure whom to trust. Patch seems to be everywhere she is and seems to know more about her than her closest friends. She can't decide whether she should fall into his arms or run and hide. And when she tries to seek some answers, she finds herself near a truth that is way more unsettling than anything Patch makes her feel.

For she is right in the middle of an ancient battle between the immortal and those who have fallen -- and, when it comes to choosing sides, the wrong choice will cost Nora her life.

There will be spoilers! If you don't want to read them, skip down to the recommendation.

I have such mixed feelings about this book. The teacher in me wants to scream, "When did stalking become sexy?!" The reader in me that knows that liking fictional bad boys is okay (so long as you don't internalize those qualities in a real life guy), wants to say, "Oooh, fallen angels; this could be good".

I'm a fan of supernatural love stories if they're done right. Mainly, the female character is strong and not spineless, the plot is believable, and the male character is likable. We'll see if Hush, Hush meets those criteria.

Patch, the fallen angel character in question, is stalking Nora. That much is very obvious, even to her. Patch is also dangerous. Also very obvious. This is pretty much a textbook case of "run to the hills, girl, that boy means trouble!" Yet Nora continues to go against her better judgement and finds herself drawn to him. Patch's behaviour towards Nora borders on sexual harassment, and is just plain creepy; if he was a human boy, he'd get slapped pretty quick (among other things). I have a thing with fictional bad boys where their behaviour is excusable up to a certain point if they're human, and they can get away with a little more if they're in the non-human category. Patch is a fallen angel, which means he can get away with a lot of bad-ass behaviour (fallen angels are the original bad boys after all), but Nora doesn't even suspect that he's not human until half way through the book! I honestly felt like slapping her until the half-way point because of her stupidity.

Once I got past the half-way point, I started to like Patch and Nora a bit more. Things were a little out of Nora's control, and Patch didn't actually want to kill her. He actually loves her...awwwww. Nothing says "I love you" like repeated attempts on your life. This is the part that gets to me as a teacher. There are some girls who will read this book and see that "yeah, he's creepy, but he loves her!" Yes, Patch loves Nora, but he only falls in love with her after he attempts to use her for his own benefit. Most guys in real life will just use you for their own benefit without the whole falling in love part. So, my only beef with this book is the potentially bad relationship model this gives girls without a better one to fall back on.

The plot is done well, everything all comes together nicely at the end. It was a page-turner, mostly I just wanted to see how Nora would react to Patch, then I actually got involved in the story. The characters are very real, I liked Nora and Vee, aside from the way they handled themselves when in the presence of the boys.

Again, this was a very well written story with some down-to-earth characters, I'm just not a big fan of the "I love you! Oh, and yeah I really did try to kill you those last few times..."

Recommendation:
If you can get past the stalking and sexual harassment behaviour, then you've got a well-written, entertaining story on your hands.

Thoughts on the cover:
The cover was the one thing that attracted me to this book (aside from the title). You're looking at what I assume is Patch "falling". His wings are black, broken, and losing feathers. The image is a lot more powerful when you realize the feathers at the top of the cover are blood red. This cover really is amazing, I hope the sequel's cover is just as good.
Posted by Andrea at 2:48 PM