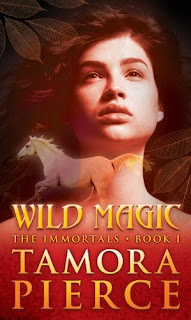 Summary:
From chapters.indigo.ca:
Thirteen-year-old Daine has always had a knack with animals, but it's not until she''s forced to leave home that she realizes it''s more than a knack -- it's magic. With this wild magic, not only can Daine speak to animals, but also she can make them obey her. Daine takes a job handling horses for the Queen's Riders, where she meets the master mage Numair and becomes his student.
Under Numair's guidance, Daine explores the scope of her magic. But she begins to sense other beings too: immortals. These bloodthirsty monsters have been imprisoned in the Divine Realms for the past four hundred years, but now someone has broken the barrier. It's up to Daine and her friends to defend their world from an immortal attack.

Review:
Yes, I'm on a nostalgia kick, so more Tamora Pierce. This series was my favourite when I was younger so re-reading it was fun. Veralidaine ("Daine") is a newly orphaned girl who has a way with animals. When she is taken on as assistant to Onua of the Queen's Riders, she has finally secured a life for herself. When immortal creatures start attacking Tortall from the Divine Realms, Daine and her newly discovered wild magic must aide in the fight to defend Tortall from them. Daine is one of my favourite of this author's heroines because she is simple but very good-hearted, plus she gets flustered so easily. The plot moves along very quickly and doesn't lag. The characters really make this series, Daine is sweet and innocent, Onua and Alanna are comic relief, Numair is charming, and the animal characters are witty.

Recommendation:
If you like medieval fantasy with strong female characters and lots of animals, read this!

Thoughts on the cover:
Again, thank god for cover redesigns. This version is so much nicer than the original, even though it doesn't show Daine's curly hair.
Posted by Andrea at 7:25 PM