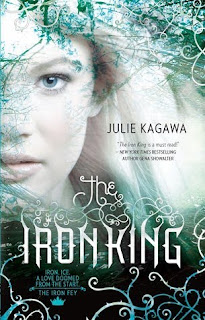 Summary:
From the author's website:
MEGHAN CHASE HAS A SECRET DESTINY— ONE SHE COULD NEVER HAVE IMAGINED…
Something has always felt slightly off in Meghan’s life, ever since her father disappeared before her eyes when she was six. She has never quite fit in at school…or at home.
When a dark stranger begins watching her from afar, and her prankster best friend becomes strangely protective of her, Meghan senses that everything she’s known is about to change.
But she could never have guessed the truth—that she is the daughter of a mythical faery king and is a pawn in a deadly war. Now Meghan will learn just how far she’ll go to save someone she cares about, to stop a mysterious evil no faery creature dare face…and to find love with a young prince who might rather see her dead than let her touch his icy heart.

Review:
When this book came on my radar, the first thing I thought was, "oh lord, not another dang fairy book", because, to be honest, they're starting to get as popular as vampire books, and I have yet to find one that really stands out from the mass of them. However, I read a sample chapter online and I like the writing style, so I decided to pick this up. I'm going to deviate a little to talk about the publishing imprint this falls under: Harlequin Teen. I don't know about you, but as soon as I hear "Harlequin" in the same sentence as "books" and I think "trashy romance novels". However, upon doing some research into the imprint, I found that these are not smutty romance stories for teens, they have the same romantic content as any other teen novel. Another thing that I really like about this imprint is that out of the 10 or so books they're released so far, only one has been in hardcover. All new releases, most of them printed straight to paperback. I like this, as a reader and as a reviewer, I'm more likely to pick up a blind-buy if I'm only dropping $10 as opposed to $20, so that means more books for my classroom and less waiting for weeks for holds at the library. Another one of their titles, Inside Out by Maria V. Snyder (which is next on my reading list) has gotten some great reviews, so I figure this imprint can't be all that bad, if for nothing else than releasing stuff in paperback first rather than hardcover (my wallet likes this).

So anyway, enough about the publishing imprint. The Iron King starts off with Meghan Chase getting ready for school. She lives in rural Louisiana with her mom, stepdad, and little half brother, Ethan. I immediately liked Meghan because she was very down to earth, and also because of Ethan, I love how she interacted with him, got me hooked onto the story immediately. Shortly afterwards, Ethan is kidnapped by faeries and replaced by a changeling - a faery child that attacks Meghan's mother and is insanely violent. Meghan discovers her best friend is really Robin Goodfellow aka Puck in human guise, and begs him to take her into the faery realm to bring Ethan back. Along the line she finds out that she's the daughter of Oberon, which gives her even more daddy issues than she already had, and enlists the help of a cat named Grimalkin and Ash, prince of the Unseelie Court, to aid her in her quest to the court of the Iron King where Ethan is being held prisoner. I'm not usually a big fan of quest stories because they usually tend to drag in certain spots, and this is no exception, there were a few spots in Part Two that I simply skimmed over because they were boring and didn't miss much. Granted, the characters are a big plus in this book. The cat, Grimalkin, is funny in a serious "you're an idiot...I'm a cat and I know better than you" way, and Puck is hilarious and very witty, I loved Puck. Ash is kind of hard to judge, he's the love interest, but I saw more hints of romance between Meghan and Puck than I did between Meghan and Ash, aside from the dance scene at the ball. Hopefully the romance between the two will get better in the following books (this is book one of a trilogy).

Recommendation:
If you're looking for a well-written fantasy that centers on fairies, with likable characters, read this!

Thoughts on the cover:
I like the half-image of Meghan's face framed with crawling vines. The blond of Meghan's hair and the turquoise of the vines work really we ll together, and some of the vines are raised and shiny. I like shiny.
Posted by Andrea at 6:11 PM