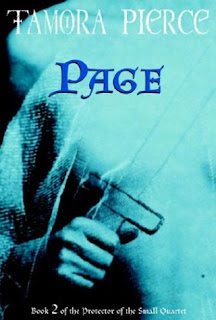 Summary:
From Amazon.com:
Kel’s hardships continue as she fights the prejudices that come with being a girl while maintaining the rigorous training of a page. Kel’s skills aren’t the only thing that are developing. Her feelings for her best friend Neal are also changing...in a very uncomfortable way. Luckily Kel has some new allies, including an ugly but lovable dog and an abused young woman to whom she teaches self-defense.

Review:
Okay, this is the last one, I promise.
The second book in this series covers Kel from the age of 11 until her 14th birthday, basically all of her remaining years as a page. She goes through puberty, gets a crush a Neal, acquires a maid and teaches her to defend herself, saves a dog, leads the boys against an attack on bandits in the woods, and has to make some hard decisions about what her priorities are. Kel continues to be mature, calm, and composed, sometimes to the frustration of the other boys, especially the ones that want to see her fail. I think the cutest part was when the pages were all getting ready to serve at the mid-winter banquet and they all come to see Kel beforehand to get her approval that they look nice and presentable, which is funny since Kel's not the ideal person for this, but she's the only girl around so the boys automatically go to her. Seeing the boys go a little nuts over her honour as soon as she develops a chest is just funny... sweet, but funny. I'm glad Lalasa was added as Kel's maid because it gave her another girl to talk to about things. The ending was unexpected, but in a good way, it shows that just because Kel's barely 14 doesn't mean that she won't be dealing with some pretty serious issues down the road because of what she's chosen to do.

Recommendation:
If you liked the first book in the series, this one is better, so read this!

Thoughts on the cover:
I like how they kept the theme amongst the covers, but the image itself is kind of blah.
Posted by Andrea at 12:33 PM