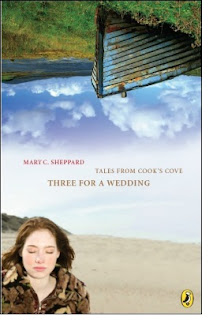 Summary:
From Amazon.ca:
There’s something mysterious about Grace-Mae’s arrival in Cook’s Cove. She wasn’t expected to arrive so early and without her mother, and there’s a strange reporter who’s been roaming around town asking questions about her, too. But Violet, Grace-Mae’s cousin, doesn’t have time to unravel the mystery. She’s got final exams, her sister’s wedding, and a garden party to prepare for. And her first boyfriend. This is sure to be a summer she’ll never forget.

Review:
This is the third title in the Tales from Cook's Cover series, though not necessarily to be read in that order. This series, written by a Canadian author who grew up in Newfoundland, is all about one large extended family living in and around Cook's Cove and the young women growing up in it. The books deal with different girls in the family in different time periods, for instance, Three for a Wedding chronicles the summer of Violet Lewis and her family; whereas one of the previous books, Seven for a Secret, tells the story of her mother and aunts when they were teenagers. I've read One for Sorrow, another title in the series, and I really enjoyed it, so I decided to give this title a try. Though immensely different than One for Sorrow, Three for a Wedding is no less enjoyable. Violet Lewis is 16 in 1988 and desperately wants to stay in her hometown that her now deceased father worked so hard to keep his family in, but is constantly pressured by her mother to go to medical school in Toronto in the hopes of finding better opportunities. At the same time, her older sister Jenny is getting married, so the plans for the wedding are squeezed in amongst studying and school functions. On top of all that, Violet's cousin, Grace-Mae, arrives for the wedding from Boston 2 months early and is staying with Violet's family. Grace-Mae is spoiled, stuck-up, materialistic, and the complete opposite of the girls from Cook's Cove, at least that's how she appears on the outside. Violet knows there's something fishy about her cousin's sudden arrival and is determined to find out.

One of the best things about this books for me was all the wedding preparations and all the frustrations Jenny had to go through to plan it. For teenagers reading this, all those vignettes would seem very boring, but for someone who's been through planning a wedding and had some of those very same problems, it made me relate to the story all that much more. Of course since it's 1988, Jenny chooses frilly purple bridesmaid dresses, but thankfully for Grace-Mae's talents in fashion design the girls don't end up looking too ridiculous. The whole crux of the novel is Violet holding herself back from her future potential because she doesn't want to leave Newfoundland because her father worked so hard to keep the family from moving out of it, and she feels like she'd be dishonouring her father's memory by doing the very thing he would have hated. Eventually, she realizes that she's holding herself and her mother back from realizing their dreams and decides to do what's best for both their futures. All the stuff with Grace-Mae and finding a first boyfriend is all mixed in amongst that. This really is a slice-of-life story, almost like a Miyazaki movie, there's no real conflict aside from real-life stuff everyone deals with, and it feels as if you could be watching this all take place in your own backyard rather than in a book. Granted, you have to like that sort of story, some people are insanely bored by it, I'm the opposite.

This series doesn't get nearly as much attention as it should, it's written by a Canandian author about Canadian teenage girls from the 60s, 70s, and 80s, and it takes place in Newfoundland...I can't remember the last time I read a book that takes place in the Maritimes that wasn't a Lucy Maud Montgomery novel. These are wonderful realistic fiction novels that examine different generations of the same family growing up on the east coast, they're well worth the read, so check them out.

Recommendation:
If you like slice-of-life stories, read this! Or, if you're looking for a good example of YA Canadian literature, read this!

Thoughts on the cover:
The first book in the series, Seven for a Secret, was under a different publisher than the latest two, and as such had a different cover. I much prefer the covers of One for Sorrow and Three for a Wedding, they're dynamic with the upside-down image that is unmistakably Maritimes at the top with the image of the female character at the bottom. They're just very gorgeous covers, I almost hope that the first one gets a re-vamp cover to match the other two.
Posted by Andrea at 8:26 PM