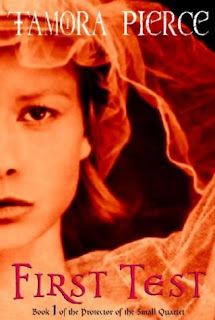 Summary:
From Amazon.com:
Keladry (known as Kel) is the first girl to take advantage of the decree that permits girls to train for the knighthood. The only thing that can stop her is Lord Wyldon, the training master of pages and squires. He does not think girls should be knights and puts her on probation for one year. It is a trial period that no male page has to endure and one that separates the friendly Kel even more from her fellow trainees. But Kel is not someone to underestimate. . . .

Review:
Ah, Tamora Pierce, this takes me back; I read through her Song of the Lioness quartet and The Immortals quartet in the late 90s when I was in high school. This series of books about Keladry takes off right after The Immortals quartet left off, but you don't necessarily need to read all the series from the start to get a feel for the universe that is Tortall, there are glossaries and most of the background info is explained for you. After Alanna the Lioness became the first woman to become a knight after concealing her sex to do so, a proclamation went out that girls could attempt a page's training like boys. Ten years have passed and no girl has applied until Keladry. With training master Wyldon dead set against females becoming knights, and Alanna forbidden by the king to have contact with Keladry because it might show favouritism, Kel is truly on her own. But Kel is a different kind of heroine than those of previous books. Living in the Yamani Islands for years (a thinly veiled version of Japan), Kel has been trained to never question orders, to never show emotion, and to fight using moves the boys in Tortall have never seen. She's also very calm and composed, unlike the fiery temper we see in Alanna. Kel's got morals too, she stands up to the third year pages when they take their usual hazing of the first years a little too far, despite the fact that she gets beat up almost every time she does. I love how this author always writes very strong female characters, her stories reek of feminist influences, and I don't know how I could have pictured myself at 13 or 14 without having read all her books.

Recommendation:
If you're looking for a medieval style fantasy with really strong female character, read this!

Thoughts on the cover:
Thank the gods of book covers that all her novels received updated covers once the 2000s hit. As much as I love my copies from the 90s, the covers had a tendency to look very kiddy. I love the images for this series, either focusing on Kel's face or body as she ages and in different single colours. This particular cover for book 1 is very striking simply because you see Kel's whole face, and when I looked at the cover I immediately thought that's what Kel should look like based on her description throughout the book.
Posted by Andrea at 10:41 AM