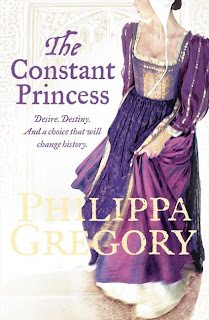 Summary:
From the author's website:
We think of her as the barren wife of a notorious king; but behind this legacy lies a fascinating story. Katherine of Aragon is born Catalina, the Spanish Infanta, to parents who are both rulers and warriors. Aged four, she is betrothed to Arthur, Prince of Wales, and is raised to be Queen of England. She is never in doubt that it is her destiny to rule that far-off, wet, cold land. Her faith is tested when her prospective father-in-law greets her arrival in her new country with a great insult; Arthur seems little better than a boy; the food is strange and the customs coarse.

Slowly she adapts to the first Tudor court, and life as Arthur’s wife grows ever more bearable. But when the studious young man dies, she is left to make her own future: how can she now be queen, and found a dynasty? Only by marrying Arthur’s young brother, the sunny but spoilt Henry.

His father and grandmother are against it; her powerful parents prove little use. Yet Katherine is her mother’s daughter and her fighting spirit is strong. She will do anything to achieve her aim; even if it means telling the greatest lie, and holding to it.
Philippa Gregory proves yet again that behind the apparently familiar face of history lies an astonishing story: of women warriors influencing the future of Europe, of revered heroes making deep mistakes, and of an untold love story which changes the fate of a nation.

Review:
My friend told me to start with this book if I wanted to get into Philippa Gregory's work, and she made a good choice, if all the other novels are as good as this one, I'll be quite happy. This one deals with the early life of Katherine of Aragon ("Catalina" for most of the novel) right up to marrying King Henry. It examines her relationship with her first husband, Arthur, Prince of Wales, whom she married at the age of 16 (he was 15). The romance between the two of them is very sweet, all the more so due to the rocky start they had. It's amazing just how much of an investment and a game marriage was back then for royal families, I knew it was, but never really understood the level it could escalate to until I read this, since it deals with marriage politics. After learning to truly love her first husband, Catalina's Arthur dies, making her promise to marry his younger brother Harry (the future King Henry) in order for her to have the power to influence and enact all the policies he wanted for his kingdom. Catalina does promise, and has to lie in order to ensure her succession as the future queen of England. It helps that Catalina is very ambitious to begin with, she's been betrothed to Arthur her whole life and grew up knowing she would be the queen, and she isn't about to give that up. She's a really admirable female lead, very strong-minded and loyal, she helps support both Arthur's and Henry's dreams while on the throne. The writing is excellent, I especially liked the little excerpts from letters/diaries that Catalina writes so you get a first person perspective as well as the third person narration.

Recommendation:
A very good piece of historical fiction with a really great romance as well.

Thoughts on the cover:
I'm a little more fond of the other cover for this novel, it's more colourful; however, this cover is nice and simple and fits in with Philippa Gregory's other covers (focusing on the dress and not seeing the whole face).
Posted by Andrea at 2:14 PM