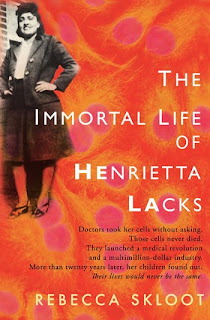 Summary:
From Amazon.ca:
Her name was Henrietta Lacks, but scientists know her as HeLa. She was a poor Southern tobacco farmer who worked the same land as her slave ancestors, yet her cells—taken without her knowledge—became one of the most important tools in medicine. The first “immortal” human cells grown in culture, they are still alive today, though she has been dead for more than sixty years. If you could pile all HeLa cells ever grown onto a scale, they’d weigh more than 50 million metric tons—as much as a hundred Empire State Buildings. HeLa cells were vital for developing the polio vaccine; uncovered secrets of cancer, viruses, and the atom bomb’s effects; helped lead to important advances like in vitro fertilization, cloning, and gene mapping; and have been bought and sold by the billions.

Now Rebecca Skloot takes us on an extraordinary journey, from the “colored” ward of Johns Hopkins Hospital in the 1950s to stark white laboratories with freezers full of HeLa cells; from Henrietta’s small, dying hometown of Clover, Virginia—a land of wooden slave quarters, faith healings, and voodoo—to East Baltimore today, where her children and grandchildren live and struggle with the legacy of her cells.

Henrietta’s family did not learn of her “immortality” until more than twenty years after her death, when scientists investigating HeLa began using her husband and children in research without informed consent. And though the cells had launched a multimillion-dollar industry that sells human biological materials, her family never saw any of the profits. As Rebecca Skloot so brilliantly shows, the story of the Lacks family—past and present—is inextricably connected to the dark history of experimentation on African Americans, the birth of bioethics, and the legal battles over whether we control the stuff we are made of.

Over the decade it took to uncover this story, Rebecca became enmeshed in the lives of the Lacks family—especially Henrietta’s daughter Deborah, who was devastated to learn about her mother’s cells. She was consumed with questions: Had scientists cloned her mother? Did it hurt her when researchers infected her cells with viruses and shot them into space? What happened to her sister, Elsie, who died in a mental institution at the age of fifteen? And if her mother was so important to medicine, why couldn’t her children afford health insurance?

Intimate in feeling, astonishing in scope, and impossible to put down, The Immortal Life of Henrietta Lacks captures the beauty and drama of scientific discovery, as well as its human consequences.

Review:
This is so far removed from what I usually read but it's one of the few subjects of nonfiction I find fascinating. I used to love science when I studied it in high school, especially the social aspects of science and how it affects people and morality issues involved, so this was right up my alley. Essentially, all the human cells that have been used in medical advancements since the 50s were taken from this one woman who died of cervical cancer in 1951, leaving behind a husband and five children. Her family didn't even know about the medical field using her cells until the 70s. As they aged, they knew more about their mother's cells and how they were used than they knew about her. The key part of this story is the fact that the cells taken from Henrietta Lacks in 1951 were taken without permission while she was undergoing a biopsy related to her cervical cancer treatment, which is the same case today, any cells taken from you during medical treatments can be used for research down the road without your permission (though if someone wants your cells explicitly for research they need permission). When I think about how many blood tests I've had, how many surgeries and procedures I've had, it made me realize there's a lot of me floating around in the medical field that I never even thought about. What made Henrietta Lacks' cells so amazing was that they were the only human cells to grow and survive outside the human body, which made them ideal to use in medical experiments where the effect on human cells needs to be tested. HeLa, the name given to the cell line that grew out of Henrietta Lacks' cells, has been used in almost every single medical advancement you can think of: the polio vaccine, mapping the human genome, HIV, HPV, IVF, cancer research, you name it.

The ironic thing about the situation is that Henrietta's family were ignorant of much about their mother, including her cells. When scientists wanted to analyze the DNA behind HeLa cells in the 70s, they contacted the family saying they needed to test the family's blood to see if they had the same cancer Henrietta had. So the family felt more than a little kept in the dark by the scientists involved in their mother's case, especially with the race issues that were woven through everything. Also, Henrietta's family were not very highly educated, so a lot of the medical and scientific terminology went completely over their heads and they misunderstood a lot of what they read and heard about HeLa cells, and what the scientists were trying to tell them. When you think in your head that parts of your mother are being sent into space and involved in atom bomb trials and wondering whether those parts of your mother actually feel pain from these experiments and not understanding the basic science involved, that's bound to be very stressful. Add to that the fact that Henrietta's descendants can't afford health insurance and are addled with many medical conditions (a few which result from their parents being cousins), it almost make you want to laugh from the irony. By law the family are not eligible for compensation, but your sense of justice just seems slighted, seeing the family of the woman who provided cells for all medical research that can't pay medical bills. The book also brings up a lot of cases of medical ethics related to the HeLa cells, especially about informed consent. I think the medical ethics of the 50s and 60s was the most interesting part of the book, scientists injecting HeLa cells into prisoners thinking those cells would cause cancer and not telling them what they were injecting into their arms.

One aspect of the novel that kept hammering over and over in my head was the aspect of education. A lot of the pain and stress felt by the family was because they were not well educated. Henrietta's husband had a 4th grade education, and although half her children graduated high school, they didn't have the skills to properly understand much of what they were told and read. I see the same thing in my own family with relatives who didn't complete high school, and I keep telling the kids I work with that if they don't have a basic education not only will they not get decent jobs but people will take advantage of their ignorance. Though with most families, the Lacks remedied this with their future children. Many of Henrietta's grandchildren and great grandchildren went on to college after high school, and her children fully recognize the value of a good education and that things would have been different if they had a good education. So although this book is really about medical ethics, me, forever the educator, managed to find a way to bring up education in a nonfiction science book.

Recommendation:
If you like books on this type of subject and can stomach all the science-speak, read this! Even if you're not a science person, the book isn't written like a textbook and the concepts are very easy to understand.

Thoughts on the cover:
I like the insert picture of Henrietta, and the blown-up image of HeLa cells was a good touch too, but they could have picked better colours than orange and pink, bleh.
Posted by Andrea at 4:16 PM