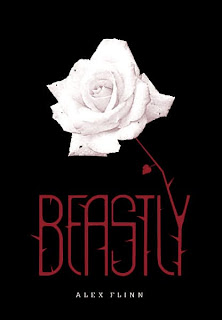 Summary:
From the back cover:
I am a beast. A beast. Not quite wolf or bear, gorilla or dog, but a horrible new creature who walks upright – a creature with fangs and claws and hair springing from every pore. I am a monster.

You think I’m talking fairy tales? No way. The place is New York City. The time is now. It’s no deformity, no disease. And I’ll stay this way forever – ruined – unless I can break the spell.

Yes, the spell, the one the witch in my English class cast on me. Why did she turn me into a beast who hides by day and prowls by night? I’ll tell you. I’ll tell you how I used to be Kyle Kingsbury, the guy you wished you were, with money, perfect looks, and a perfect life. And then, I’ll tell you how I became perfectly beastly.

Review:
The first I heard about this was from the trailer for the upcoming movie. Beauty and the Beast is my favourite fairy tale (I even worked a Beauty and the Beast reference into my wedding speech), and I knew I had to go see a modern retelling of it, even if my first impression was that it looked like a stupid teen movie. Then I saw the book in the store the other day (I had no idea it was based on a book), so I snatched it up, and the only reason it took a two-day span to read this was because I had to sleep, and because I had to go to a funeral (if it was just the sleep I'd have sacrificed that, no prob).

So yes, this is a modern retelling of Beauty and the Beast. I've seen and read lots of different versions: the 80s television series, the Disney version, the old black and white French version, The Rose by Mercedes Lackey, and Beast by Donna Jo Napoli. I figured I'd seen and read as much as could possibly be done with this story while still keeping it similar, but this version goes one step up: it's modern. Take some parts of the French and Disney film versions with the modern elements from the television series (just update it for the 2000s), and you've got Beastly. Kyle Kingsbury is like every boy I hated in high school: obsessed with his own looks with no substance of his own. He finally goes too far when he plays a cruel trick on a girl at his private school named Kendra, who's really a witch that puts a spell on him to teach him a lesson about what true beauty is. Once he realizes his rich father's money can't reverse the Beast spell using plastic surgery, his father exiles him to a brownstone in Brooklyn where he lives with his blind tutor, Will, and housekeeper, Magda. Kyle, who changes his name to Adrian, knows his only hope is to find a girl who will love him for who he is, but he has to love her back, which might be the harder part of the deal for him. Lindy comes into his life via her drug-addict father who offers Kyle his daughter in exchange for not turning him into the police when he is caught breaking into Kyle's home. The rest is pretty predictable if you're familiar with the story, but the beauty (pardon the pun) is in the details.

I love how they didn't sugar-coat the fact that Lindy's father was a sleaze who gave up his daughter to a stranger (keep in mind Kyle is a beast and pretty freaky looking). The Disney version danced around this, but in every other version she's given up without a second thought, so I'm glad that wasn't changed. I also like how they made Lindy a total bookworm, and how Kyle/Adrian eventually becomes a bookworm too due to his confinement. They actually bring up bits of classic books, so it's great when they reference The Phantom of the Opera, The Hunchback of Notre Dame, and Jane Eyre, and you actually know what they're talking about. Another cool thing is the intermittent instant message chat sessions between Kyle/Adrian and several other classic fairy tale characters who have also been transformed: the Little Mermaid, the bear from Snow White and Rose Red, and the frog from the Frog Prince. I loved those little bits, all the transformed characters arguing with each other over who has it worse and giving each other pep talks over the internet. They give a lot of back-story to Kyle/Adrian, Lindy doesn't even come in until halfway through the book. This is from his point of view though, so his character is pretty well-developed. The only thing I didn't like was the fact when the book fast-forwards from the fall to the following spring 7 months later, Kyle/Adrian turns from a selfish jerk starting to come around to a wonderfully sensitive guy who spouts romantic lines and who has a thing for his rose garden. Wuh? Where did all that come from, it happened pretty quick. Not that I couldn't believe it could happen, I'd just have liked to see that transition happen over a couple of pages rather than in two sentences. Lindy's character falls pretty flat (but I love her cause she's bookish), though granted I think we're supposed to feel for Kyle/Adrian moreso than her and just be happy that the girl he falls for is a normal and down-to-earth. We did get the back-story with her father and family life, I just think it would have been nice to flesh out her character a bit more than was done.

Recommendation:
If you like fairy tales and would like to see a modern retelling, read this! If you're in for a cute, fluffy, romantic story, read this! It's all around cute, I honestly can't find much fault with it, it's just a warm and fuzzy feeling kind of book. The romance is cute and realistic (they're teenagers, so they don't sleep together or elope or anything) without being too corny or unbelievable.

Thoughts on the cover:
I like the font and how the rose thorns stick out from the letters. Other than that, bleh, very boring. That, and the cover's shiny black, which means you can see fingerprints and smudges everywhere, which annoys me to no end.
Posted by Andrea at 10:12 PM