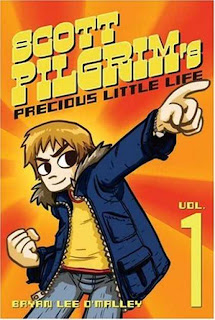 Summary:
From Amazon.com:
Scott Pilgrim is 23 years old, lives in Toronto, plays bass in a band called Sex Bob-Omb and has a very cute 17-year-old Chinese-Canadian girlfriend, Knives Chau. His "precious little life" is amiably unstructured, and he drifts, happily unemployed, between band practice and time spent with Knives. His relationship with Knives is chaste—walks, chats and hugs—although Knives is getting bigger ideas. "We haven't even held hands," Scott explains. "It's just nice, you know." But then he starts having dreams about Ramona Flowers, a mysterious, equally cute and perfectly legal hipster chick on Rollerblades who delivers books for Amazon.ca. Ramona is anything but simple, and O'Malley's tale of adorable slackers in love is transformed into a wildly magically manga–kung fu fantasy adventure. We meet the first of Ramona's seven evil ex-boyfriends, Matthew Patel, who challenges Scott and his band to a supernatural martial arts duel right out of Crouching Tiger, Hidden Dragon. O'Malley has crafted a delightfully hybrid comics love story. It's an alt-lit, rock 'n' roll graphic novel with wonderful manga-influenced drawing and a comically mystical plot that manages to capture both the genuine intimacies and serial dishonesties of young love.

Review:
I am ashamed to admit that I had yet to read any of the Scott Pilgrim books before today. The geek that I am, who married a geek, and hangs out with geeks, and I had yet to read Scott Pilgrim, shame on me. I'm glad I did though, it's a wonderfully funny series (from what I can tell from the first volume) and is a nice change from all the serious stuff I usually read. The art style is rough, but not unappealing; and the story is a mix of a young adult version of Seinfeld and Nintendo's Super Smash Bros. Scott Pilgrim lives with his gay roommate, Wallace, in a house full of things he doesn't own. He dates a high school girl since there's no pressure for intimacy, and has visions of an Amazon.ca delivery girl that runs subspace shortcuts for her route through his head...that's right. The story is so immensely silly that when Scott and his band break out into punk rocker kung-fu in order to defeat the first of Ramona's seven evil ex-boyfriends, you're not all that shocked. Just when the book makes you think you're not supposed to take it seriously, you're kind of impressed by the things Scott does (like having a chaste relationship with Knives, and not being bummed out about not having sex with Ramona). I love the little details, like Scott plugging through waist-high snow walking home, and the little status subtitles that will appear with a character's name and age.

Recommendation:
Again, immensely funny and silly, so worth the read. Even though it's rated T for teen, I can see that some conservative people might have issues with Scott sleeping in the same bed with his gay roommate (cause they can't afford another bed), and later on with Ramona, even though no sex happens in either incident.

Thoughts on the cover:
Scott doing his finger-point fight pose. I like the sunburst rays behind him radiating outward.
Posted by Andrea at 3:02 PM