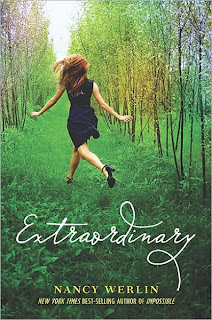 Summary:
From the author's website:
What does it mean to be extraordinary? Phoebe finds herself drawn to Mallory, the strange and secretive new kid in school. Soon the two girls are as close as sisters . . . until Mallory’s magnetic older brother, Ryland, appears. Ryland has an immediate, exciting hold on Phoebe—but a dangerous hold, for she begins to question her feelings about her best friend and, worse, about herself.

Soon she’ll discover the shocking, fantastical truth about Ryland and Mallory, and about an age-old debt they expect Phoebe to pay. Will she be strong enough to resist? Will she be special enough to save herself?

In the vein of Nancy Werlin’s previous novel Impossible, Extraordinary is a tale of friendship, romance, and the faerie realm.

Review:
Here there be spoilers!
I read Impossible and Rules of Survival by this author over a year ago and absolutely loved them. So when I found out the author had a new book out, I obviously knew I had to read it. Now after finishing Extraordinary, I find I like Impossible and Rules of Survival more, but Extraordinary isn't without its charm...after a slew of headaches to get to it.

Plot in a nutshell: the Queen of Faerie made a bargain with a patriarch named Mayer that, in exchange for his five sons to be made truly extraordinary, one daughter from his future line must be surrendered. Mayer has one condition: in order for the girl to be handed over, she must admit, in all her faculties and maturity, that she is ordinary. Fast forward a couple hundred years and we meet Phoebe Rothschild, the beloved only child of the famous Rothschild clan that feels just a bit insecure about herself compared to her amazing family. She meets and befriends Mallory, who is really a faerie masquerading as a human, and the two become as close as sisters. Years later when Phoebe is 18, Mallory's brother Ryland (also not human) shows up and glamours Phoebe into admitting that she really is worthless and nothing compared to everyone else in her family, that she is simply ordinary. With Phoebe now at the mercy of the dying faeries that want their debt settled, will she rise to the occasion and become extraordinary to get herself out of the mess that surrounds her?

I liked that Extraordinary was more about the friendships Phoebe has with Mallory, and later Benjamin, rather than about the romance with Ryland. It would've been easy to turn this into a paranormal romance, but the author makes it so that episodes between Ryland and Phoebe are so wrong that you can't even begin to see their encounters as romantic. Although the writing is beautiful as is expected from the author, the plot just didn't do anything for me. Phoebe is an irritating character for the bulk of the book, granted it's not her fault, she's being glamoured and she can't resist it, but still, three quarters of the book are about Ryland and Mallory completely tearing down Phoebe...that's not exactly entertaining for me. By the time you get past the whole emotional abuse/glamouring part to the end where Phoebe's told about why they did it and things eventually get resolved, you're so fed up with reading through the first three hundred pages that you almost miss the enjoyment that is the end of the novel. The best part honestly was the last hundred pages where everything comes together, it was almost worth slogging through the first three hundred for. I get the feeling that Extraordinary would be better suited to a shorter story that cuts through half the background info, or to a simple fairy tale that explains certain facts in a sentence and readers believe it as gospel without any elaboration needed. Again, the ending was wonderful, the stuff of awesome stories with good message and everything, but the beginning of the book almost ruins that by being completely infuriating.

Recommendation:
Not as amazing as the author's previous works in my opinion, but does have its good points. If you feel like putting it down half-way through, try to hold out right to the end, the ending is worth the read.

Thoughts on the cover:
A nice image of Phoebe running through the faerie glen. I like how on all the covers for books by this author that I've seen that feature an actual person, you can never see the person's face, you either see them from behind or their face is hidden by their hair. It's hard to tell by looking at the cover, but it has a subtle shimmer to it, which I love.
Posted by Andrea at 7:37 PM