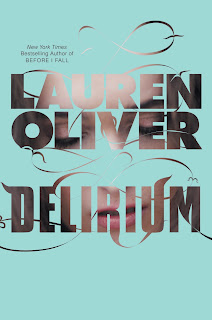 Summary:
From Goodreads.com:
Before scientists found the cure, people thought love was a good thing. They didn’t understand that once love -- the deliria -- blooms in your blood, there is no escaping its hold. Things are different now. Scientists are able to eradicate love, and the governments demands that all citizens receive the cure upon turning eighteen. Lena Holoway has always looked forward to the day when she’ll be cured. A life without love is a life without pain: safe, measured, predictable, and happy.

But with ninety-five days left until her treatment, Lena does the unthinkable: She falls in love.

Review:
Similar to Ally Condie's Matched that I read last month, Delirium is a dystopian romance that's been receiving a lot of hype, and a lot of mixed reviews. You can tell when a book is riding so much on hype, there wasn't a summary of the plot anywhere on this book: the back cover just had a quote and praise for the author's first novel, and the inside cover had another quote and praise for the author herself. You gotta love how a book can present itself as almost arrogant in a case like this.

Magdalena, called Lena, lives in a futuristic version of the United States where all borders are closed and where all feelings of love, called the deliria, have been eradicated in everyone once they reach the age of 18, essentially by lobotomy. Lena is tainted by her father's death and her mother's suicide caused by the deliria, and the worry that the cure she wants so badly will fail her like it failed her mother. As her eighteenth birthday draws closer and Lena longs for the cure to guarantee her safety, she encounters a boy named Alex and slowly begins to fall in love with him. When she is evaluated and presented with her official match, she realizes she can't go through with normal life like she thought she could and makes plans to be with Alex any way she can.

First off, the whole "love is a disease" plot was a wonderful idea, the author plays with the idea of how society would function without love or hate, with just indifference to everyone else. The fact that Lena grew up knowing true parental love from her mother, who wasn't cured, and admits that the best parts of her childhood were those she spent knowing her mother loved her as opposed to the cold way cured adults usually act towards their children was the part of the novel that really got to me, it made me think of a world where loving a child like a parent should is seen as sick and wrong. The whole idea of a loveless society was appealing and gripping, so kudos to the author for that. Her writing style is beautiful and lyrical, she perfectly captures the feelings of first love.

I think the only thing that kept this from being a complete "OMG I love this book" kind of experience was the world building. And considering it's a dystopian book, world building is really important to really get involved in the plot and for suspension of disbelief. Even though we're given an info-dump at the very beginning about love being thought of as a disease and all that, we're not really told why people all of a sudden, in less than a hundred years, went from valuing love to everyone allowing themselves to be lobotomized to be rid of it. What major event lead to this change? How did scientists discover the "cure"? We're never really told, which is asking a lot for readers to swallow, especially when the world the author portrays is not far-enough removed from our own. If this world is so scientifically great that it can "cure" love, then how come people still have crappy convenience store jobs? If there have been incidents of teenagers falling in love before the cure, why not completely separate them before the cure, rather than just making it illegal to have contact with the opposite sex? There's one line about pre-cured teenagers falling in love with same sex partners, just that they're labeled as unnatural, so some more elaboration on that would've been nice too. How are Alex and Lena so easily able to sneak out after curfew, even with raids going on? Things just seem too convenient at times to believe. If the world building had been as amazing as I know it could've been, this would've been an amazing book, but sadly it falls short. This is the first in a series, so I'm hoping the future installments can salvage my opinion of this first book (as well as the horrible cliffhanger ending).

Recommendation:
Whereas Condie's Matched had decent world building and a less impressive plot/romance, Delirium has a great plot and romance but its world building prevents it from being completely enjoyed in my opinion. I will cherish the day that I read a YA dystopian novel with a romance focus that I actually like in all aspects, cause I haven't found it yet.

Thoughts on the cover:
I love the shade of blue they've used, and how Lena's face is only seen through the cut-outs of the title (not physically cut-out but it appears that way). The cover underneath the dust jacket has the full view of Lena's face.
Posted by Andrea at 1:40 PM