The Rules of Survival - Nancy Werlin 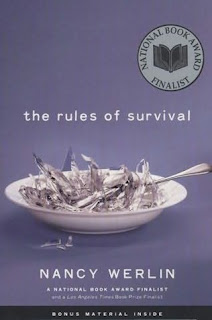 Summary:
From the author's website:
The Rules of Survival is the story of Matthew Walsh of South Boston, and his sisters, Callie and Emmy. It's written in the form of a long letter to Matt's youngest sister.

He says: "Emmy, the events we lived through taught me to be sure of nothing about other people. They taught me to expect danger around every corner. They taught me to understand that there are people in this world who mean you harm. And sometimes, they’re people who say they love you, and mean it."

Matt has long since put himself in charge of protecting his sisters from their enemy.

And who is their enemy?

It's Nikki O'Grady Walsh. Their mother. Who loves them.

Matt's managed to keep himself and his sisters safe, more or less. He's done okay. But secretly, inside, he's growing tired and hopeless.

Then, suddenly, there's a possible ally on the horizon. Someone who can maybe help him get rid of his mother for good.

Review:
While I was researching Impossible, Werlin's most recent book that I read this past month, I remember several commenters saying they preffered Impossible over Werlin's previous novel (The Rules of Survival) because of they hated the 'terrible mother'. When I saw this and realized this was the book with the 'terrible mother', I figured I'd give it a shot and see what people were so up in arms about. How bad could the mother character be, right? Famous last words. I read this in the span of a few hours because I was so caught up in the lives of Matthew and his sisters and what they had to endure.The story is told by 17-year-old Matthew to 9-year-old Emmy in the form of a letter. The events in the novel take place when Matthew was 13-15, Callie was 11-13, and Emmy was 5-7. Having a knife held to your throat because you stole a cookie, and being slammed in the face with a bag of mussels for trying to clean up the kitchen are some of the (believe it or not) minor things done to the children by their own mother. These things aren't necessarily done in secret either; Nikki's ex-boyfriend Murdoch witnessed Emmy being held off a cliff by her ankles, and Aunt Bobbie (Nikki's sister) sees similar things on a daily basis since she lives in the same house. You'd think with Nikki's behaviour it would be easy for one of the various adults involved in the story to stand up and act to try to get the children away from her, but they don't. After an incident Matthew cannot ignore, he goes to his biological father as well as Murdoch to beg their help to escape from his mother. It is only after Nikki tries to make make Murdoch's life a living hell that he gets involved.

Nikki is completely insane, I'll put that out there, I don't think I could ever dream up a character this twisted and wrong. She scared the heck out of me, and I'm a grown adult, I can just imagine how all the characters felt. I think the scene when they're driving home from the amusement park, the one that finally forces Matthew into action, was the scariest thing Nikki did in the whole book because it was so completely unexpected. The idea that kids need adults to act on their behalf in these situations and don't find that help is depressing to say the least; I've seen kids removed from their parents for less than that, and the times they really need to be removed for their own safety are the times people are too scared to say anything. Nikki's character is probably the cause of this: she's insane and neglectful, but she also shows love to her children. Her seemingly bipolar personality would confound anyone.

There are so many themes and ideas running around in this book: the different faces of abuse, people living their lives purely in survival mode, daring to hope, and superheroes vs. everyday heroes. This is an excellent book to share with kids and adults, for kids to see that these things happen and that's not right, and for adults to see that it's their duty to stand up and do something to protect kids that have no one fighting for them.

Recommendation:
A frightening book, but one that needed to be written and needs to be read.

Thoughts on the cover:
The cover is simple yet powerful. The bowl of broken glass with a spoon in it against a blue background speaks volumes, especially when you look at it again after reading the book. Matthew and his sisters walk on eggshells (or broken glass) around their mother, and the glass in the cereal bowl reminded me of the times when Nikki forces the kids to eat till they vomit, they know if they refuse her they'll get something worse than that.
Posted by Andrea at 1:14 PM