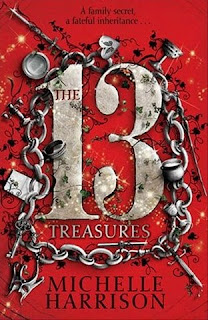 Summary:
From the back of the book:
A family secret, a fateful inheritance...

While visiting her grandmother's house, Tanya discovers an unsolved mystery. Fifty years ago, a girl vanished in the woods nearby - a girl Tanya'a grandmother will not speak of. Fabian, the caretaker's son, is tormented by the girl's disappearance. His grandfather was the last person to see her alive, and has lived under suspicion ever since. Together, Tanya and Fabian decide to find the truth. But Tanya has her own secret: the ability to see fairies . Can it help them to unravel the mystery? Soon they are facing terrible danger - could the manor's sinister history be about to repeat itself?

Review:
This is the first book in a trilogy, originally published in the UK. The Thirteen Treasures has been published in the US (called 13 Treasures), but no news yet if the other two books will be released in the US. Thanks to a combination of Amazon.ca and the Book Depository I've purchased all three books (UK editions), so there are ways to obtain the whole series if you find you really like this first book or if you just really want to keep your series consistent in terms of hardcover/paperback (UK editions are all paperback whereas the US edition of the first book is in hardcover). Plus I prefer the UK cover art, but anywhoo, on to the book itself.

Tanya has the second sight and can see fairies, but of course no one else around her can. With her mother unable to deal with the repercussions of her daughter's ability, she sends Tanya to her grandmother's house for summer vacation. While trying to avoid the wrath of the fairies that roam her grandmother's house, Tanya becomes aware of a local mystery, a girl that disappeared from the area fifty years ago. Along with some secrets of the house itself and cases of missing children from town, Tanya and Fabian investigate and begin to discover that all their mysteries are more intertwined than they previously thought.

This would've been plain old typical kiddie fantasy for me if not for a few key things. The whole story has a nice darker undertone to it, and there's a lot of depth to everything that you don't often see in a children's book. The one thing I wasn't nuts about was that The Thirteen Treasures really takes a while to get going, but once it does it literally takes off. The changeling subplot is something I find hasn't shown up in too many fairy/faerie novels, so it was nice to see that aspect explored. I liked all of the characters, but really wanted to see more of Red, I loved her, she was a strong, fiery female character (turns out she gets more focus in book two, so I'm happy).

One thing you might want to be aware of if this type of thing concerns you. Some of the original UK content was slightly tweaked and/or removed for the US release of the book (in addition to the usual changing of British vocabulary). I'm not a big fan of this by any means, so I'm glad I'm reading the UK editions, but some readers may or may not care, so I thought I'd mention it here. Thanks to Charlotte's review for making me aware of this (details about the extent of the changed content are in her review post).

Recommendation:
If you liked the Inkheart trilogy and The Spiderwick Chronicles, The Thirteen Treasures is a book/series for readers ready to graduate to a darker, more satisfying story. I really enjoyed it and will definitely be reading the other two books. 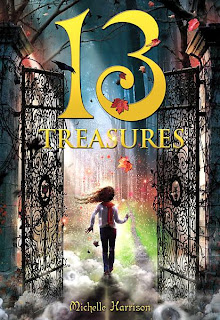 I have to say, compared to the US cover art at right, I much prefer the UK cover art. I know the US art is pretty, but I like covers that can pull off not showing a character's face, and the UK covers do that quite well. On the UK cover, I love the red colour and how the charm bracelet and all the charms are clearly displayed. The sparkles and the ivy on the title font are nice touches too.
Posted by Andrea at 5:38 PM