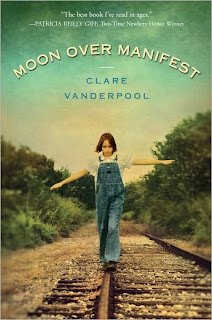 Summary:
From the inside cover:
Abilene Tucker feels abandoned. Her father has put her on a train, sending her off to live with an old friend for the summer while he works a railroad job. Armed only with a few possessions and her list of universals, Abilene jumps off the train in Manifest, Kansas, aiming to learn about the boy her father once was.
Having heard stories about Manifest, Abilene is disappointed to find that it’s just a dried-up, worn-out old town. But her disappointment quickly turns to excitement when she discovers a hidden cigar box full of mementos, including some old letters that mention a spy known as the Rattler. These mysterious letters send Abilene and her new friends, Lettie and Ruthanne, on an honest-to-goodness spy hunt, even though they are warned to “Leave Well Enough Alone.”
Abilene throws all caution aside when she heads down the mysterious Path to Perdition to pay a debt to the reclusive Miss Sadie, a diviner who only tells stories from the past. It seems that Manifest’s history is full of colorful and shadowy characters—and long-held secrets. The more Abilene hears, the more determined she is to learn just what role her father played in that history. And as Manifest’s secrets are laid bare one by one, Abilene begins to weave her own story into the fabric of the town.

Powerful in its simplicity and rich in historical detail, Clare Vanderpool’s debut is a gripping story of loss and redemption.

Review:
Moon Over Manifest won the Newbery Award for this year, so in my usual tradition, I had to read it. I'm usually nuts over the Newbery winners, but last year's When You Reach Me didn't absolutely wow me. I was hoping for a better impression of this year's winner, but Moon Over Manifest sadly didn't give it to me, although I did like some aspects of it.

It's 1936 and twelve year old Abilene Tucker is sent by her drifter father Gideon to his childhood town of Manifest, Kansas for summer vacation. She stays with her dad's friend Shady Howard, who used to be a bootlegger but is now the town's pastor, who lives in a combination church/saloon. Abilene soon becomes indebted to the town's fortune-teller, Miss Sadie, and when Abilene visits her to pay off her debt, Miss Sadie tells her stories about Manifest's past and people from 1918. So you've got the whole story within a story thing going on here.

The story of Manifest in 1918 is much more entertaining than the 'present' Manifest of 1936, with the town's various immigrants banding together selling moonshine to buy a piece of land in order to negotiate better work terms from the town's mine owner. The 1936 Manifest with Abilene trying to both discover her father's childhood and that silly search for the town's spy is a little boring, but I can appreciate the point of the book's two stories side by side, of Abilene trying to understand her dad, of the town remembering that spark they had years ago that they're lacking twenty years later. I loved Abilene, Jinx, and Shady, the author made some wonderful characters here, even if the pacing and plot are a little lacking. Perhaps my expectations were a bit high considering it won the Newbery, but regardless it was a bit of a letdown but still enjoyable.

Recommendation:
Didn't blow me away by any means but still a decent read with wonderful characters.

Thoughts on the cover:
I like Abilene's pose, it's very whimsical.
Posted by Andrea at 8:32 PM