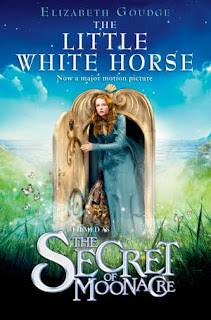 Summary:
From Goodreads.com:
In 1842, newly orphaned Maria Merryweather, her governess, and dog arrive at her ancestral home in an enchanted village in England's West Country where the people's bliss is marred by a dark shadow.

Review:
I'll admit, the only reason I even picked up this book was because I came across the recent movie version, The Secret of Moonacre, and wanted to read the original source. I liked the premise of the movie but thought it was poorly executed and the plot was confusing at times. So I picked up the original book, The Little White Horse, which is a strange title since the horse doesn't show up all too often. This reads like a classic children's book like the Narnia series: the writing style is very reminiscent of the 40s and 50s, the descriptions are very detailed and vibrant, and it hasn't held up well over time.

Maria Merryweather is orphaned when her father dies and goes to live with her second cousin Sir Benjamin at their family's ancestral home, Moonacre Manor. She must uncover her family's past and remedy the wrongs made by all the adults involved and restore the village and valley to its former glory. In a manner befitting children's books of the period, the heroine glides through the book's plot because things happen to her, not because she seeks out anything on her own. She's saccharine sweet and loving and adults mysteriously give in to her whims because she asks politely. There's the whole religious aspect where the bad guys are atheists and they magically convert and mourn the error of their ways, and the sexism, oh the sexism.

But if you've ever read older children's books from 50-60 years ago you're familiar with all of this. They don't exactly transition well to the modern day, but this one isn't so bad since the plot takes place in Victorian England so we can always say "it's historical, the men are allowed to be sexist." Putting all that aside, I loved this book. I have a special place in my literary heart for British children's books like The Secret Garden and A Little Princess that I read as a child and adored, and I would have had the same reaction to The Little White Horse if I'd read it when I was 10. I can appreciate beautiful writing style of these older books and how wonderfully simplistic and charming they are. They remind me of carefree childhoods where young children randomly went out and frolicked in the woods till after dark and no one called the police to report them missing. You have to admit, these books are good for nostalgia. The Little White Horse is charming and magical (though much less fantasy-like than the movie makes it out to be), and another great children's classic...but I'm pretty sure boys wouldn't touch this book, Maria's too interested in clothes and flowers and being a girl to engage male readers. For young girls that love the old classics though, this is a wonderful choice that will be surely enjoyed.

Recommendation:
If there's a young girl in your life that's reading the old classics like The Lion, The Witch, and the Wardrobe; The Secret Garden, A Little Princess, etc., then pick up The Little White Horse for her, she'll love it. It goes without saying that the movie version of this novel is very different so make sure you read the book in addition to seeing the film so you get the whole story.

Thoughts on the cover:
This is the movie tie-in cover, so it reflects the extra fantasy elements from the movie. The regular covers usually have the 'little white horse' itself on it with a castle/mansion in the background with a nice dash of purple.
Posted by Andrea at 12:29 PM