The Magician's Book: A Skeptic's Adventures in Narnia - Laura Miller 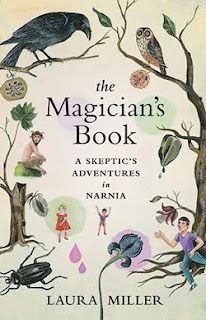 Summary:
From the inside cover:
The Magician’s Book is the story of one reader's long, tumultuous relationship with C.S. Lewis' The Chronicles of Narnia. As a child, Laura Miller read and re-read The Lion, the Witch and the Wardrobe and its sequels countless times, and wanted nothing more than to find her own way to Narnia. In her skeptical teens, a casual reference to the Chronicles’s Christian themes left her feeling betrayed and alienated from the stories she had come to know and trust. Years later, convinced that "the first book we fall in love with shapes us every bit as much as the first person we fall in love with," Miller returns to Lewis' classic fantasies to see what mysteries Narnia still holds for adult eyes—and is captured in an entirely new way.

In her search to uncover the source of these small books’ mysterious power, Miller looks to their creator, Clive Staples Lewis. What she discovers is not the familiar, idealized image of the author, but a man who stands in stark contrast to his whimsical creation—scarred by a tragic and troubled childhood, Oxford educated, a staunch Christian, and a social conservative, armed with deep prejudices.

The Magician’s Book is an intellectual adventure story, in which Miller travels to Lewis’s childhood home in Ireland, the possible inspiration for Narnia’s landscape; unfolds his intense friendship with J.R.R.Tolkien, a bond that led the two of them to create the greatest myth-worlds of modern times; and explores Lewis’ influence on writers like Neil Gaiman, Jonathan Franzen, and Philip Pullman. Finally reclaiming Narnia "for the rest of us," Miller casts the Chronicles as a profoundly literary creation, and the portal to a life-long adventure in books, art, and the imagination. Erudite, wide-ranging, and playful, The Magician’s Book is for all who live in thrall to the magic of books.

Review:
I don't tend to read literary criticism that often but this was a topic I just couldn't pass up, especially since I loved the Narnia books as a child. Of course when I read them, the whole religious allegory thing went completely over my head as it does with all kids that read them, and I didn't get the religious symbolism until I re-read the books in high school, after which I promptly shoved them into the "good things ruined by religion" phase I had when I was 17. And then I became an educator. It's amazing how one's opinion of books changes when you're a teacher, you look at them in a completely different way and evaluate them differently. I give my students the Narnia books to read just as easily as I give them Pullman's His Dark Materials series, which is extremely ironic since Pullman wrote it almost as an anti-Narnia. I have no issues giving my students books like these mostly because kids don't see those religious themes that adults point out so quickly, they just see a story they either like or don't like for unrelated reasons. And I will probably read both Lewis' and Pullman's books to my future children, because I've come to see the books as stories and nothing more. I'll let my kids analyze their childhood literature in time like I did mine, but until then, I'll let them enjoy their stories for what they are.

So enough of my nostalgia over Narnia, let's get to the book. The author here essentially became disillusioned with her favourite Narnia books after discovering the religious allegory as a teenager (sounds familiar). She assumed she could no longer enjoy the books as she once had (as much as an adult can enjoy a children's book) because she wasn't religious and therefore that's all the books had to offer. The Magician's Book is the author exploring all the different aspects of the Narnia series that don't relate to Christianity, saying that these books can still be appreciated without the heavy religious overtones. In the first part, she explores elements of the book she enjoyed as a child, from the talking animals to the absence of parents, and relates how these themes are explored in some other children's works. In the second section, she remembers the bad parts of Narnia that helped her disillusionment as an older reader (again, leaving out the religion); from the racism, the portrayal of female figures, and the issue of Susan (Narnia readers will know what I mean by that), including possible reasons or influences from Lewis' life that may have lead to these being included in his writing. The third section explores aspects of the Narnia books that readers can appreciate with an adult perspective, from the landscapes inspired from Lewis' childhood to the borrowings of Norse myth that Lewis loved so much.

As you can tell, there's a lot of detail about Lewis' life itself here, along with his fellow writers that had an influence on him, mainly Tolkien. So there's a lot of slogging through Lewis' very strange and slightly messed up personal life, so if that is a turn off for some readers, you might want to skip some sections of part 2 and probably most of part 3. I found them interesting, but granted, this is coming from the person whose university degree comprised of reading some of the most inane literature on the face of the planet (I actually can say I have read Moby Dick and survived). I loved the author's writing style and voice, you can tell she loves this subject matter, and it comes across rather well here. Having read the Narnia books before reading this makes the most sense (why would you read this if you haven't read the Narnia books?), but it's not necessary since the author recaps any episodes from the books relating to a point she's making at the time.

In addition to the Narnia stuff, there's a lot of good material over why we read books in the first place, especially as children. There's a lot of good quotes about the love of reading that I'm going to go back to and keep for future use (possibly for essays or tests for my students), so there's some real gems here.

Recommendation:
Obviously something Narnia fans will want to pick up, especially if you're not particularly religious, but even if you are you'll find some good stuff here. Well-written with some good insight, it will make you rethink how you view books as an adult.

Thoughts on the cover:
I know the cover's probably supposed to look like an old children's book cover from the 60s, and that it has the images of things from Narnia that aren't overtly religious and my suggestion completely goes against the point of the book, but I still think this book would've rocked with Aslan on the cover. Just saying...
Posted by Andrea at 10:56 PM