The Curse of the Wendigo - Rick Yancey 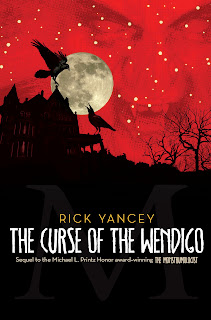 Summary:
From the author's website:
While attempting to disprove that Homo vampiris, the vampire, could exist, Dr. Warthrop is asked by his former fiancee to rescue her husband from the Wendigo, a creature that starves even as it gorges itself on human flesh, which has snatched him in the Canadian wilderness.

Although Warthrop also considers the Wendigo to be fictitious, he relents and rescues her husband from death and starvation, and then sees the man transform into a Wendigo. Can the doctor and Will Henry hunt down the ultimate predator, who, like the legendary vampire, is neither living nor dead, whose hunger for human flesh is never satisfied? This second book in The Monstrumologist series explores the line between myth and reality, love and hate, genius and madness.

Review:
I loved The Monstrumologist when I read it a year ago, so of course picking up the next book in the series was a must. Surprisingly, I liked The Curse of the Wendigo even more than The Monstrumologist, something that doesn't happen that often with a sequel.

Same as in the first book, the narration is presented as the author reading the diaries of Will Henry chronicling as an adult his encounters with Dr. Warthrop as a child in 1888. The plot for this book is slightly different than in The Monstrumologist. Whereas the monsters in the first book were acknowledged by Dr. Warthrop and his colleagues, the doctor goes through this whole book protesting that he is really dealing with a Wendigo at all. When he is asked by his former lover to rescue her husband, John Chanler (Dr. Warthrop's best friend), who has been missing in the Canadian wilderness, he only agrees out of love for the both of them. Chanler had been hunting a Wendigo, a cannibalistic mythological creature from North America, and had been presumed killed. When Dr. Warthrop and Will Henry manage to find John and bring him back to civilization, the doctor believes John to be afflicted with a traumatic disorder (Wendigo psychosis) and not transforming into the monster as his colleagues believe. When John escapes to the streets of New York City and bodies begin pilling up, Dr. Warthrop is forced to reconsider that his friend might be lost to him.

I thought the concept of the Wendigo was deliciously creepy. Whereas I thought the monsters in the first book weren't very scary in description, yet the author thoroughly described the carnage they caused, they still worked in the context of a horror novel. The Wendigo on the other hand, is human in appearance and cannibalistic to boot, which made it all the more freaky, so I was definitely more creeped out while reading this novel as opposed to the first one. The relationships between characters in this novel are more fleshed out and are essentially the driving force of the book. We see Will Henry coming to terms with how he feels about staying with Dr. Warthrop and their strange father-son/master-apprentice way of dealing with each other, the weird love triangle between John, Muriel and Dr. Warthrop; plus how Dr. Warthrop interacts with his colleagues from the Monstrumological society in New York. The characters themselves are also more developed, particularly Dr. Warthrop. The writing is still superb with an extensive Victorian vocabulary as fitting of the time period.

Recommendation:
Wonderfully written horror novel that's equally creepy and better than the first book in my opinion. There are quite a lot of gruesome and graphic descriptions, not to mention some sexual stuff between the adult characters, so I wouldn't give this to the faint of heart. For those that like a good scary story, you can't go wrong here.

Thoughts on the cover:
I love the cover redesigns for these two books. The first Monstrumologist cover was okay, but I like these new ones better, even though they're very stereotypical horror and don't contain anything relevant to the actual books themselves. The cover for The Curse of the Wendigo carries on with the raven theme from the Monstrumologist cover redesign, with the two birds and an almost haunted house style backdrop with the superimposed vampire-like face in the red background. Again, nothing really relevant to the story itself, but maybe I just like the nice solid colours...that and ravens are a horror trope anyway.
Posted by Andrea at 3:49 PM