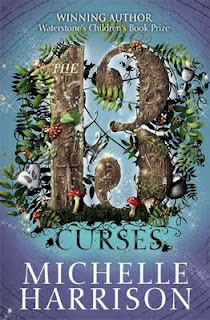 Summary:
From the back of the book:
When fairies stole her brother, Red vowed to get him back. Now trapped in the fairy realm, she begs an audience with the fairy court where she strikes a bargain. Her brother will be returned - but only if she can find the charms of Tanya's bracelet, scattered in the human world.

Returning to Elvesden Manor, Red is assisted by Tanya and Fabian, and a desperate hunt begins. Soon they make a shocking discovery. The charms are now cursed with the twisted qualities of the thirteen treasures they represent...and the longer they are missing, the worse the consequences will be. Can Red, Tanya, and Fabian find all the charms? And even if they do, will the fairies keep their promise?

Review:
If you haven't read the first book in the series, The Thirteen Treasures, then you might want to skip to the Recommendations part of the review, since I can't talk about this second book without spoiling the first one. If you've got no qualms about spoilers, then by all means read along.

Sequel to The Thirteen Treasures, The Thirteen Curses takes place a few months after the events of the previous book. Red is stuck in the fairy realm while Tanya and Fabian are back at Elvesden Manor trying to figure out why Warwick and their new housekeeper Nell are missing. This sequel doesn't suffer from the slow-to-start issues that The Thirteen Treasures did, the action picks up here and doesn't let go. It also helps that the reader's following three separate plot threads in the first half of the book, so there's always something interesting you're following: Red in the fairy realm trying to get an audience with the Seelie Court, Red's flashbacks of what led up to her brother James' disappearance, and Tanya and Fabian back at Elvesden. Once you get to the mid-point of the novel, you get to the plot that's actually summarized on the back of the book: the three kids hunting down the charms from Tanya's bracelet before chaos erupts so they can get James and Warwick back.

Not only is the pacing not an issue in this book (my only complaint from the first book), but Red gets some remarkable character development here, and I love how Red's not always a nice person, it's refreshing to see a child protagonist in a children's book that's actually cruel to a certain extent, it's not something you see too often.

Recommendation:
I liked The Thirteen Curses even more than the first book, this series keeps getting better and better. This is definitely one of the best series I've read in a while, so read these! Remember, the second and third books in this series (The Thirteen Curses and The Thirteen Secrets) aren't available domestically yet, only in the UK, so you'll have to order them via The Book Depository if you want to get your hands on them, but it's so worth the effort.

Thoughts on the cover:
Whereas the first book's cover was a solid red, this one is a mix of purple and teal. I love the illustration and how it incorporates the title, it's rare to see a children's book cover that relies on objects rather than people to attract your attention, and these covers pull it off remarkably well.
Posted by Andrea at 1:02 PM