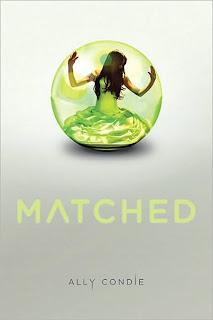 Summary:
From the inside cover:
In the Society, Officials decide. Who you love. Where you work. When you die.

Cassia has always trusted their choices. It's hardly any price to pay for a long life, the perfect job, the ideal mate. So when her best friend appears on the Matching screen, Cassia knows with complete certainty that he is the one...until she sees another face flash for an instant before the screen fades to black. Now Cassia is faced with impossible choices: between Xander and Ky, between the only life she's ever known and a path no one else has ever dared follow-between perfection and passion.

Review:
I knew it was only a matter of time before dystopian fiction became popular enough in YA for someone to write one with a romance focus rather than the "overthrow the corrupt government" focus that is typically what defines the genre. Whereas a lot of dystopian does contain romance, it is usually a sub-plot going on while the main characters fight a corrupt dystopian government/leadership. In Matched, there are seeds of rebellion planted against the Society and its Officials, but it takes a backseat to the love triangle.

Cassia Reyes lives in the Society, where every major decision is made for citizens by Officials. People are told where they can live, who they can marry, when and how many children they can have, what they can eat, what they can wear, and how long their lifespan will be. Creativity is practically nonexistent, citizens literally have lost the ability to write, the only textual communication is via computers. Most people in the Society enjoy the benefits these limitations have given them: they live to the fullest capacity free of cancer and other diseases, they are matched to their future partners with genetic compatibility in mind, and everyone is healthy due to strict food control. We first meet Cassia on the way to her Matching Banquet, where she and other 17-year-olds will find out who the Officials have picked as their Match, the one they will eventually be allowed to marry. When Cassia is matched with her best friend Xander, she is happy; people almost never get matched with someone they know. But as she's viewing the keycard with her match information on it, another face appears on the screen after Xander's-another boy she knows. When the Officials tell Cassia that Ky Markham appearing as her match is a mistake, it plants the seed of doubt in her mind. Cassia begins to question whether or not Xander really is her true match, and why citizens in the Society aren't allowed to make such choices for themselves.

This book received soooo much hype over this past summer, but was pretty much split down the middle for me: it wasn't completely horrible, but it wasn't great by any means. Practically all the world-building details of the Society are identical to Lois Lowry's The Giver: the drab clothing, the ceremony, the jobs, the extermination of the elderly, the activities, everything. Matched can be summed up as The Giver with a female lead with a love-triangle focus. I could live with that though if that's all it was, so many books use very similar ideas to each other, so you're bound to run into stories with familiar elements in them. However, the original content in Matched either wasn't very impressive or just didn't convince me at all. For example, the idea that people in Cassia's world cannot physically write did not make sense at all given the details. People can read, study poetry, type on computer-like devices like tablets, and are allowed to draw on digital devices as children. I find it very hard to believe that even with the absence of traditional writing instruments like pens, that someone didn't have the idea to pick up a stick or something and mimic the letters they read. Toddlers can pick up a marker and mimic shapes and letters on paper without being taught, so how come no one in Cassia's world, especially adults, didn't think to ever do that? I don't buy it for a minute, it doesn't make sense.

The whole love triangle aspect wasn't even that great. I didn't really like either of the boys, Xander and Ky. Xander was completely bland, he seemed to only exist to tempt Cassia back to the familiar by being wholly understanding and overly helpful. Ky was like a bad stereotype, the loner with a bad past that happens to spout forbidden poetry. Sam in Maggie Stiefvater's Shiver and Linger is a much better poetry-spouting boy. It seemed like the whole forbidden poetry thing was included to try and make the characters seem deep but just ended up awkward, kind of like the little metaphors the author worked into the text at the end of every chapter. Some of them work, but most of them are just bad and cheesy...and once you notice them in the text it's really really annoying. Even Cassia was pretty bland. I know she's supposed to be due to the environment she grew up in, extreme emotions are repressed and all that, but even when she begins to question things after reading the poem her grandfather left for her, she was still pretty lukewarm. Perhaps it's because I like my heroines to be a little fiery when they need to be, but still.

The writing was't bad, aside from the cheesy and awkward metaphors. I did read the whole book, so it wasn't completely horrible, but a lot of that impetus to read on was the world-building and watching things eventually crumble, which was very similar to The Giver (and I love The Giver, hence my desire to read about a universe with similar details), so the author can't even claim that to her credit, because another author did it first. This is the first of a trilogy, so things could improve in future installments. The second book comes out in the fall of 2011, so I will probably read it simply because I wasn't turned off enough to abandon this series completely.

Recommendation:
Didn't live up the the hype for me. Not complete crap but nothing to write home about either. People looking for a dystopian Twilight, or someone that doesn't read a lot of dystopian would probably enjoy this. People that are used to reading excellent dystopian fiction probably would find something missing here.

Thoughts on the cover:
I like Cassia in the bubble in her green banquet dress. The rest of the cover could've benefitted from some more colour though...I know it's probably a metaphor for the lack of colour in the Society, but I like my covers colourful, not drab and grey.
Posted by Andrea at 11:10 PM