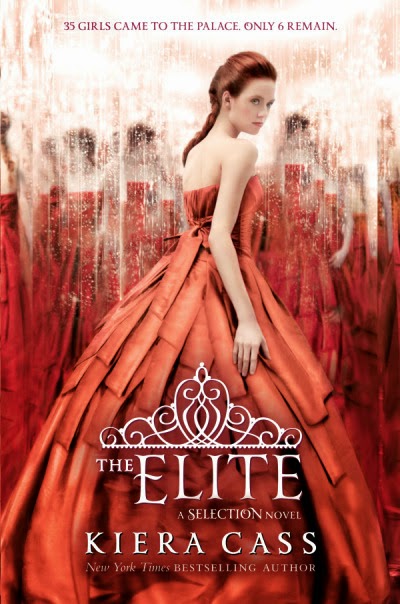 The Selection began with 35 girls. Now, with the group narrowed down to the Elite, the competition to win Prince Maxon's love is fiercer than ever. The closer America gets to the crown, the more she struggles to figure out where her heart truly lies. Each moment she spends with Maxon is like a fairy tale, filled with breathless, glittering romance. But whenever she sees her first love, Aspen, standing guard, she's swept up in longing for the life they'd planned to share.

America is desperate for more time. But while she's torn between her two futures, the rest of the Elite know exactly what they want - and America's chance to choose is about to slip away.

Review:
After reading and loving The Selection, I knew this was one series I'd devour. Thankfully for me books 1-3 are already out (not sure if there's more coming aside from the side stories).

The Elite picks up where The Selection left off; America is one of the Elite, the six girls remaining from the original 35. Stakes are higher now, Maxon is under pressure to narrow down his choice according to which girl is the people's favourite, has political connections, or comes from a good family, none of which applies to America. But she remains Maxon's favourite until things begin to unravel and America sees a side of Maxon and the royal family that shakes her to the core. When she reconsiders whether she truly wants this life, Maxon bonds with the other girls. Cue both of them hemming and hawing over whether they still love and want each other. Basically that's the gist of the book with some more political intrigue and insight into how twisted the King is thrown in for good measure.

This was more of a bridge book to me, as 2nd books in a trilogy/series tend to be, however it did develop the political aspect of the plot, and we see America even more determined when confronted with adversity.

Recommendation:
If you liked The Selection, you'll already have read this. If not, I suggest you give this series a try.

Thoughts on the cover:
Again, these covers are gorgeous. I like how the model has more auburn-red hair than orange-red, it actually makes the dress and colour scheme work.
Posted by Andrea at 7:42 PM