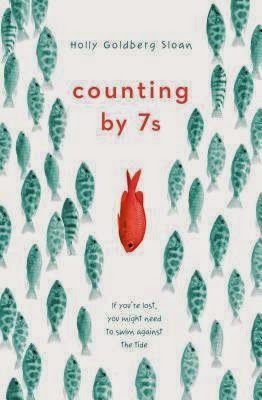 7 reasons to read this extraordinary novel:

1. Friendship. It doesn't always happen easily, especially for Willow. But now she has met Mai, a girl with enough energy to tackle the impossible, and one who sees Willow for who she really is.

2. Oddballs. We all feel like outsiders sometimes. Willow the genius - who has mastered several foreign languages and medical-school textbooks all by the age of twelve - certainly doesn't easily fit in with the crowd. Neither do the other people in this story filled with terrific, memorable oddballs.

3. Hobbies. It helps to have something interesting to focus on, such as Willow's passion for nature. When tragedy strikes, it is the simple act of growing sunflowers that first brings her some pleasure again.

4. Laughing and crying. But despite the tragedy, this is a beautiful, satisfying book - the kind that makes you see your own life in a new way. And through the heartache, you will find yourself laughing...at the wonderfully absurd moments that happen even on the hardest days.

5. Miracles. Those unexpectedly silly moments are miraculous. This is a story filled with everyday miracles.

6. Family. And the most miraculous thing of all is a loving family.

7. Willow Chance herself, whose heart leads her on a path to belonging - a path that is surprising, exhilarating, and without a doubt, one you will never forget.

Review:
This book was likened to Wonder in several blurbs I read, and since I have an almost obsessive love for that book, I decided to give this one a try.

Willow is a genius, possibly on the spectrum as well. She counts by 7s to help calm her down, enjoys diagnosing medical conditions, and learning Vietnamese for fun. She's not challenged at school and has no friends because of how odd she is. When she gets a perfect score on an aptitude test and is accused of cheating (despite the school knowing she is gifted, really school?), she is referred to the school counsellor,  Dell Dukes, for behavioural counselling. Dell is a pretty bad counsellor, he does nothing that remotely resembles counselling. But since Willow is beyond counselling at this point, he can get away with being incompetent.

Then, Willow's adoptive parents both die in a car accident. Since Willow has no other family, her new friend Mai convinces her mother Pattie to take Willow in temporarily. Since the Nguyen family doesn't really live in appropriate conditions (they live in a garage behind the nail salon Pattie works at), they somehow convince Dell to let them overtake his apartment so the social worker won't put Willow in another place. In the process of cleaning up Dell's disorganized living space, planting a garden on the apartment grounds, helping Mai's brother Quang-ha through his troubles at school, and playing guardian angel to a random taxi driver, Willow endears everyone to her to the point where a surrogate family develops.

I enjoyed Willow's voice in this novel,  she's very adult despite being a twelve-year-old, but I think that's realistic of a prodigy. She says some real gems here, absolute moments of clarity that you just want to write down. The novel shows Willow's progression through grief and how she goes from not really belonging anywhere to having seven individuals that love her and that impact her life.

I did have one issue with the book. It's sweet, endearing, and quirky, but the ending is really unrealistic. So SPOILER ALERT! because this won't make sense unless I spoil it. Pattie and Jairo the taxi driver end up getting guardianship of Willow, and it turns out Pattie had a ton of money she was hoarding and saving. So though she was living in a garage and putting her two teenage kids through a life of poverty living in a garage and sharing a bed, she now brings out the big bucks to buy an entire apartment building once Willow is living with them permanently? But didn't spend that money when her own kids needed it? I'm not buying it. Plus Jairo just happens to win the lottery too (inadvertently caused by Willow), so everyone just happens to be swimming in money by the end, it seems a little too convenient.

Recommendation:
It's no Wonder, but it's quirky and cute, if not a little hard to believe at times.

Thoughts on the cover:
It's cute and appropriate, I like it.
Posted by Andrea at 9:00 PM