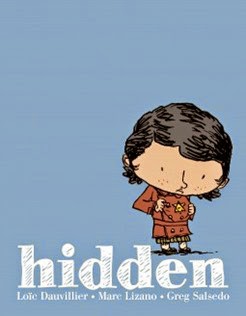 Like every grandmother, Dounia was once a little girl herself.

Tonight, she's finally ready to tell her granddaughter a secret about her childhood - something she never even told her son.

Tonight, Dounia is ready to share her memories of Paris in 1942. Memories of wearing a Star of David, of living in fear, of the kindness of strangers.

Memories of being hidden.

Review:
The thing I find most fascinating about Holocaust narratives is that you get a different perspective depending on the age of the person and which country they lived in. There are lots of similarities that unite all these various stories together, but a child in France that survived by being in hiding will have a completely different experience than one that survived by living in the forest in eastern Europe, same with a child from Germany or Poland that was actually sent to a concentration camp.

Dounia's young granddaughter Elsa is staying overnight, and when she wakes up in the middle of the night to find her grandmother up as well, she urges Dounia to share the reason why she can't sleep. Dounia then proceeds to tell Elsa of her childhood in France after the German occupation. She remembers the one day everything changes, when her father tells her they need to wear "sheriff's stars, when friends suddenly disappear, and when she is ostracized at school. Soon, soldiers come looking for her. Her parents hide her in a false bottom in a wardrobe, never to return for her. A kindly neighbour couple takes her in, but the husband is soon taken away for keeping Dounia hidden. Now on the run, the wife finds a farm to take Dounia to, arranged by the Resistance. After years in hiding, some are reunited and some are not. Back to the present, Elsa's father confides in his mother that he now knows the story courtesy of his daughter, and that he understands why his mother never told him, but that he's proud she was able to share it with Elsa.

This is a short graphic novel, a very quick read, but very powerful. There isn't anything overly violent in this book (nothing like Schindler's List kind of disturbing), but it does discuss the treatment of Jewish people and anti-Semitism, and that might be a lot for a particularly sensitive young reader to process, so proceed with caution depending on age and maturity of the reader. I'd say most kids over age 10 or so should be able to handle the content with no issues. I'd even go as far as to say that this is a good introduction to Holocaust narratives for a chid: it's short, in graphic novel format, and told from an innocent child's perspective (therefore it's not too heavy like more mature narratives).

Recommendation:
Short but excellent graphic portrayal of a child's experience of the Holocaust in France.

Thoughts on the cover:
I love the huge splash of blue, especially this particular shade of baby blue, with Dounia in the corner with her black hair and red coat, the colours really mesh well.
Posted by Andrea at 8:13 PM