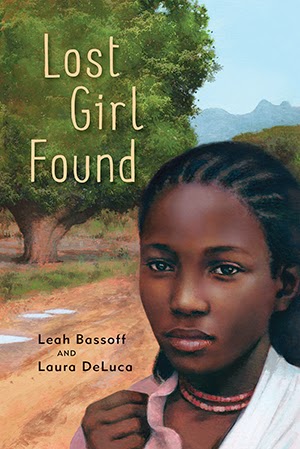 For Poni, life in her small village in southern Sudan is simple and complicated at the same time. Stay in school. Beat up any boy who tries to show attention. Watch out for the dangers in the river.

But then the war comes. And when soldiers arrive in her village, and bombs begin to rain from the sky, there is only one thing for Poni to do. Run. Run for her life.

Poni does run from the bombs, and then she is walking - a long and dusty trek across the east African countryside with thousands of refugees. Along the way, many die from starvation, land mines, wild animals, and despair, but Poni does not, driven by sheer will to survive and the hope that, against all odds, she can one day continue with her education.

Review:
I didn't realize this was a female perspective of the famous Lost Boys of Sudan until I got really into the book. I've read new stories and seen documentaries of young boys and men that were resettled in North America after surviving wars and conflict in their home countries, and I always wondered about the girls, but no one ever focused on them. This book is based off of the experiences of multiple Sudanese women and girls and portrayed as Poni. We first meet her as a 12-13-year-old girl living in south Sudan, trying to avoid an early marriage by focusing on her studies and literally beating up any boy who shows and interest in her to make them look elsewhere. When war arrives and bombs drop, Poni is separated from her parents and siblings, and she follows the other refugees to the Kakuma refugee camp in northern Kenya. She manages to survive even there, but when her foster mother threatens to marry her off, Poni escapes to Nairobi when rumours reach her of a nun who helps girls go to school.

The main thing that stands out here is the stark portrayal of gender issues in countries such as these. Early on in the book there's a scene where Poni's twelve-year-old friend is clinging to a tree and ripped from it because she doesn't want to be married off. Less than a year later, that same friend has died in childbirth, which reinforces Poni's resolve to avoid marriage at all costs. There's a scene in the camps where a girl is singled out from a group and raped, and Poni remarks on how she'll be blamed for it and will be shunned because no one will want her. The importance of education is also shown. Poni's mother tells her that her only chance to have a decent life is to continue her schooling, to the point where Poni must make a heart-breaking decision at the end of the book relating to it.

There's a few really good author's notes and a list of further resources (mostly on the Lost Boys though) at the end of the book for people wanting to research further. I love books like these because it makes our kids aware of issues going on outside of their own country and reinforces how fortunate they are.

Recommendation:
A short but powerful read on the experiences of girls in the Sudan civil war.

Thoughts on the cover:
It's appropriate but doesn't incite much of a reaction.
Posted by Andrea at 9:56 AM