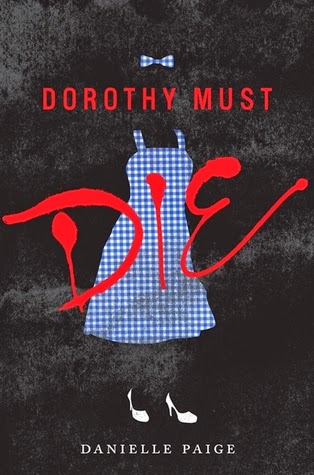 But when your whole life gets swept up by a tornado-taking you with it- you have no choice but to go along, you know?

Sure, I've read the books. I've seen the movies. I know the song about the rainbow and the happy little bluebirds. But I never expected Oz to look like this. To be a place where Good Witches can't be trusted, Wicked Witches may just be the good guys, and winged monkeys can be executed for acts of rebellion. There's still a yellow brick road-but even that's crumbling.

They say she found a way to come back to Oz. They say she seized power and the power went to her head. And now no one is safe.

My name is Amy Gumm - and I'm the other girl from Kansas.

I've been recruited by the Revolutionary Order of the Wicked. I've been trained to fight.

And I have a mission.

Review:
I love a good twist on a classic tale, and a psychotic, violent version of The Wizard of Oz is right up my alley.

Amy lives in a trailer park in Kansas, and has issues with self-esteem. You would too if your dad left, your mom spiraled into an alcohol-filled depression, and the girls at school pick on you for being trailer trash. But when she finds herself alone when a tornado comes, and later in the infamous land of Oz, she's glad for a change of scenery. Until she realizes this Oz isn't the one from the books and movies. The landscape is grey and empty, the muchkins are nowhere to be found, and anyone she does find is wearing a super creepy Perma-Smile (think the Joker from Batman times ten). Amy goes to the Emerald City to find help and discovers the cause of the drastic change: Dorothy. She's apparently the poster child for the phrase "Power Corrupts." Amy angers Dorothy by both being from Kansas and arriving here via tornado, and is sentenced to death. She is rescued by Mombi, one of the members of the resistance, and is recruited to the cause. She is trained to be a Witch by Gert and Glamora (Glinda's twin sister), to use magic in order to kill Dorothy and bring Oz back to its former glory. But there are more issues. The Scarecrow is now a mad scientist who experiments on Oz's citizens, the Tin Woodsman is a killing machine as the head of police with a wicked crush on Dorothy, and the (Cowardly) Lion is a crazed animal who randomly eats and mauls people. Amy is sent to the Emerald City to pose as one of Dorothy's maids to work undercover until the Order tells her to strike. But Amy's not sure who she can trust; she knows Dorothy needs to go, but under whose direction should it be done?

I loved the twisted aspect of an otherwise sparkles and rainbows story, but there were a few things that irked me. I didn't know this was a series when I picked it up, so I was confused when the story dragged on and wasn't moving along quickly. so the pacing was an issue for me. It should have been titled "Dorothy Should Die Eventually", because there is no resolution on that goal by the end of the book. Having Nox as a romantic interest kind of fell flat to me, they become interested in each other way too quickly and it isn't believable..hopefully that will be rectified in the upcoming books. There's a lot of pop culture references, slang, and dialect in the book that I'm not convinced a fantasy universe would contain, even if it a few people from the US did inhabit it from time to time. The characters weren't very well developed either. Amy, although sympathetic and feisty, seems like a stereotype of the under-appreciated girl with issues that develops a chip on her shoulder; and the supporting characters aren't much better either.

The violence is really intense at times (the Lion ripping someone's arm off, etc.). It was fine in my opinion, but sensitive readers might be put off by it (like Dorothy ordering her head maid to crush a mouse in her bare hands).

Recommendation:
Excellent premise and idea, but it just didn't deliver in a lot of areas. I'm hoping subsequent books will be better.

Thoughts on the cover:
I like it, Dorothy's signature pieces are all there (except for the red shoes), but they only outline her so your imagination fills in the rest.
Posted by Andrea at 1:49 PM