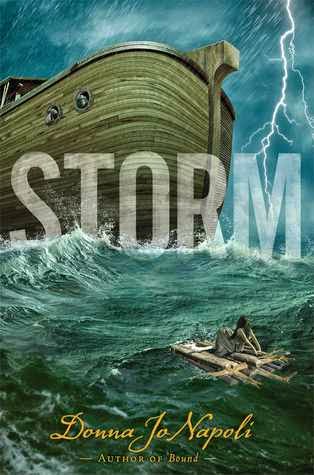 Sixteen-year-old Sebah has lost everything to the raging storm: her family, her home, her best friend. Now, she takes shelter in a tree, eating pinecones and the raw meat of animals that float by. With each passing day, her companion, a boy named Aban, grows weaker. When their tree is struck by lightning, Sebah is tempted to just die in the flames rather than succumb to a slow, watery death. Instead, she and Aban build a raft. What they find on the stormy seas is beyond imagining: a gigantic ark. But Sebah does not know what she'll find on board, and Aban is too weak to leave their raft.

Donna Jo Napoli has imagined a new protagonist to tell the story of Noah and his ark. As rain batters the earth, Noah, his family, and hoards of animals wait out the storm, ready to carry out their duty of repopulating the planet. Hidden belowdecks...is Sebah.

Review:
This was a really interesting premise. I've never read a book that retells a biblical story, so I wasn't sure what to expect. The first thing that took some getting used to was the language. The story takes place in the BCE era in Caanan, but all the characters speak what we would call modern language (no slang or anything, but not typical Bible-speak or old-English either). I was expecting the latter, so that was refreshing.

Sebah goes out to search for her brothers when the flood begins and ends up having to take refuge in a tree. Aban, a neighbour boy, soon joins her, and the two unofficially become husband and wife. When they build a raft to escape the tree catching on fire from a lightning strike, Aban grows weaker and begs Sebah to board the ark to save herself. She enters one of the portholes and ends up in a cage with two chimpanzees she names Queen and The Male. As time goes on, she eavesdrops on conversations amongst Noah and his family and learns about them, they're quite the dysfunctional bunch apparently. Sebah sees the animals go stir-crazy being cooped up for months on end, so she finds ways to let them out one at a time so they can roam. Sebah, and later Bash, another stowaway, find ways to evade discovery by Noah's family to wait out the flood.

I liked the 'what if?" aspect. I always found it hard to believe that the only humans that supposedly survived the flood were Noah and his family, so the idea that a person could've made their way onto the ark and lived there for months in secret without being discovered was really fascinating. The fact that the author added another stowaway that hides on the ark's roof was even better.

Sebah is a great character with a good personality, that despite losing everyone she knows and being pregnant in the situation she's in (yes there's mention of sex, and subsequent childbirth), she is quick on her feet and takes charge of things. The way she interacts with the animals is charming, since she can't show herself to the humans she bonds with the animals she helps to take care of.

Recommendation:
An interesting take on the Noah story with a fresh perspective, I urge you to give it a try.

Thoughts on the cover:
I like how dynamic the cover is, combined with the colour scheme it's a very eye-catching cover.
Posted by Andrea at 8:22 PM