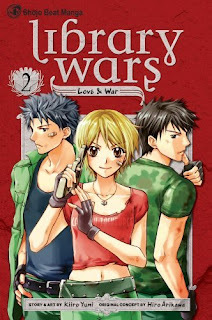 Summary:
From the back cover:
In the near future, the federal government creates a committee to rid society of books it deems unsuitable. The libraries vow to protect their collections, and with the help of local governments, form a military group to defend themselves---the Library Forces! When the director of the Kanto Library Base gets sick, a temporary replacement is assigned, according to regulations. But Iku and her roommate Asako discover a trail of missing books that leads back to the temporary director. Has he betrayed everything the Library Forces stand for and handed books over to the enemy?!

Review:
Army librarians yet again! I think this is officially my guilty pleasure series, I love it so much. The same things from volume 1 are here in volume 2: the funny bickering between Iku and Dojo, the friendly rivalry between Iku and Tezuka, and the whole censorship theme. Now that the characters and the plot are established, this volume examines some deeper political issues: the temporary director being in cahoots with the MBC to dispose of library copies of banned books, and the police force wanting the library to break privacy laws in order to expose a murderer's library account. Iku's still pretty naive about things and her black and white views of right and wrong cause everyone else around her to sigh in frustration, but that's Iku for you. Her rash behaviour causes Dojo to go in and "save her" from making things worse for the library forces... so cliche, but darn it if it isn't cute.

Recommendation:
Again, all book lovers should read this series, so much fun.

Thoughts on the cover:
Yay for cover continuity! Using the original Japanese cover image, plus keeping with the red accent colour from volume 1.
Posted by Andrea at 2:05 PM