The Face on the Milk Carton - Caroline B. Cooney 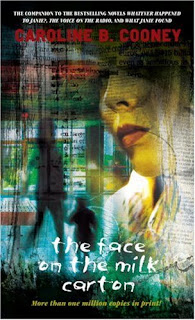 Summary:
From Amazon.ca:
No one ever really paid close attention to the faces of the missing children on the milk cartons. But as Janie Johnson glanced at the face of the ordinary little girl with her hair in tight pigtails, wearing a dress with a narrow white collar--a three-year-old who had been kidnapped twelve years before from a shopping mall in New Jersey--she felt overcome with shock. She recognized that little girl--it was she. How could it possibly be true?

Janie can't believe that her loving parents kidnapped her, but as she begins to piece things together, nothing makes sense. Something is terribly wrong. Are Mr. and Mrs. Johnson really Janie's parents? And if not, who is Janie Johnson, and what really happened?

Review:
I'm on an old books kick for some reason, finding old gems that I never read when I was younger. It reminds me just how some older books really show their age: could be pop culture references long dead, or cliches/tropes that just aren't used anymore...in this case it has to do with revelations in the plot itself. Janie Johnson sees a picture of her three-year-old self on the back of a milk carton while in the cafeteria at school and starts to question things...there are no pictures of her before the age of 5, her mother won't let her see her birth certificate, and she finds the dress from the milk carton photo in a trunk in their attic. Her parents tells her that she is really their granddaughter: that their daughter Hannah joined a cult at age 16 and showed up one day with three-year-old Janie in tow. They after a secret visit to her supposed biological family's home in New Jersery and seeing they all sport her trademark red hair, Janie suspects that Hannah just might have kidnapped her after all.

The plot of this book was kind of a letdown for me. After all the crime shows and movies dealing with missing and abducted children, I was expecting something a little more sinister...like her adopted parents really did kidnap her, or they adopted her through a botched agency or something. But a daughter joining a cult? That's so 1990s. And Janie waiting half the book to demand an explanation from her parents made me want to smack her...I'd have shoved the milk carton on the kitchen table and demanded an explanation the moment I found it. Also, her adopted parents mention that she didn't have a birth certificate, how could Janie go through life from age 3 to age 16 and not have needed a birth certificate for something? Completely unrealistic in this day and age where you need to show a birth certificate for practically anything. I did appreciate the time taken to examine Janie's divided loyalties between her biological family that she doesn't even know and the adopted parents/grandparents that raised her. She actually gets angry at her three-year-old self for running off with Hannah without a second thought to her existing family. I think of someone were to update this story considering twenty years have passed since initial publication it would do really well.

Recommendation:
Contains plot points that aren't realistic in this day and age, but altogether a good story about loyalties and ties to who raises you versus who gave birth to you.

Thoughts on the cover:
This updated cover is a bit too busy for my tastes. It also makes the book seems really dynamic and action-packed, which it isn't.
Posted by Andrea at 8:02 PM