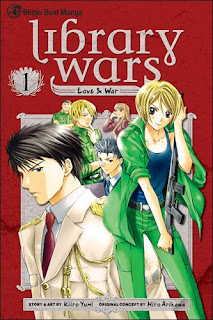 Summary:
From the back cover:
In the near future, the federal government creates a committee to rid society of books it deems unsuitable. The libraries vow to protect their collections, and with the help of local governments, form a military group to defend themselves---the Library Forces! Iku Kasahara has dreamed of joining the Library Defense Force ever since one of its soldiers stepped in to protect her favorite book from being confiscated in a bookstore when she was younger. But now that she's finally a recruit, she's finding her dream job to be a bit of a nightmare. Especially since her hard-hearted drill instructor seems to have it out for her!

Review:
I was a huuuuuge manga/anime geek back in high school and university, I have various shelves of the stuff in my house to vouch for it (as well as the degree in Japanese and the honeymoon to Tokyo). But in manga and anime, the old saying is true: "90 percent of everything is crap." one of the reasons I've bought so little manga (Japanese comics) and anime (Japanese animated programs) since graduating from university is that I'm a little out of the loop now that I have less time for my hobbies, and that a lot of the story lines in anime and manga are, to be blunt, crap. But the 10% that aren't crap are beautiful, wonderful, creative stories that rival the domestic stuff we produce in comics and television/movies. Once in a while, a story like Library Wars comes along and I know I have to take a chance on it without knowing much about it because I have a gut feeling that it'll be wonderful, and my gut is always right.

Army librarians...need I say more? Library Wars is based off a series of Japanese novels which feature an eerie Fahrenheit 451 atmosphere where the Japanese government has instituted the Media Betterment Act, laws that allow the confiscation and censorship of any media they deem unsuitable. In response, libraries become self-governing, establishing the Freedom of Library Law, which allows libraries to rebel against the national government and secure the public's freedom of access to information. In order to fulfill their obligations, libraries are run by armies, with their recruits trained in combat and librarian skills. The premise sounds so ridiculous, but those of us well versed in dystopian fiction know that anything is plausible if presented properly. The series follows Iku Kasahara, one of the first females ever accepted into the Library Defense Forces (most of the women in the series who work for the libraries do so as librarians) and is a mix of army tactics and action, slapstick comedy, romance, and general book-loving. There's the usual off-the-wall humour that's common in manga, and it might irritate people who aren't used to it, but if you're a manga aficionado it's nothing you haven't encountered before, you probably even have a fondness for it.

Iku is your typical flighty female lead (the Japanese have something against a truly admirable heroine with brains), who's pretty much dumb as a post but she makes up for it with her ambition and heart. Think Sailor Moon, just in an army outfit and without the magic. There's the archetypal scene where she explains why she joins the LDF in order to be like a man who rescued a book for her in her younger years, whom she refers to as her prince and wants to emulate. I just kind of accept these kinds of portrayals of women in manga nowadays, especially since I understand gender relations in Japanese society. Just don't let it bug you as a reader. So there's Iku, determined to protect books and people's right to read them, and her superior officer, Dojo, who it's obvious has a thing for her and expects more from her as a recruit. Anyone with a brain can see that in the flashbacks it's Dojo who was the man she idealizes from when she was younger and that the two are going to get together, but the fun of manga isn't in pointing out the obvious cliches, it's in the details and character development. Iku and Dojo have good chemistry together and are like a pair of comedians insulting each other every time they're together, and the other characters are great supports to the story. The plot actually poses a lot of thought-provoking questions about censorship and freedom of speech, which would be great to pose for classroom discussion on the topics of tyranny and governments having too much control. This particular story is very unique to manga and is one of the more enjoyable stories I've read in a while, even with the moronic yet lovable female lead.

Recommendation:
If you're a book lover and love libraries, you'll want to pick this up ASAP.

Thoughts on the cover:
Using the original Japanese cover image = good
Nice red background to match all the green in the image = good
Now hopefully they can keep the covers the same so they all match on the bookshelf.
Posted by Andrea at 7:37 PM