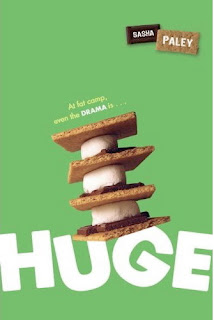 Summary:
From the back of the book:
TWO ROOMATES.
ONE GOAL.
BIG PROBLEM.

April's been saving all year to afford Wellness Canyon (aka Fat Camp) and she can't wait to start losing weight. Wil's wealthy health-nut parents are forcing her to go to the camp, but Wil is determined to get revenge by gaining weight. They're supposed to work together to meet their weight-loss goals. But Wil's leading April on "hikes" to 7-Eleven, April's relentless pep is driving Wil to hit her secret stash of Godiva, and soon they're both crushing on the same guy. With April as committed to the cause as Wil is determined to undermine the system, this summer's going to be about more than just counting calories....

Review:
This was one of the books highlighted at the teen preview night. Even though it's a few years old, the new tv series based on this prompted a rerelease. It peaked my interest because it's about Fat Camp. That's right, Fat Camp. Wellness Canyon in California is fat camp for rich kids, and April's happier than anything to be there after saving up for more than a year. Wil on the other hand, is peeved at her parents for sending her there, so she vows to put on as much weight as she can. Both girls are assigned as roommates, so their personalities clash and they start out hating each other but later end up as friends.

I guess I was expecting a bit too much from this book. Since it has main characters that are chubby, I assumed that the book would focus on some of the issues overweight teens go through, and it did, but not as much as I thought. April is trying to lose weight (without any real support from her mom) so she can be popular like she's always wanted. Wil's parents own a chain of gyms and she is angry that her parents are embarrassed by her weight and the messages she receives that her body's not good enough because she's heavy. April saves up to go to Wellness Canyon, whereas everyone else including Wil was sent there by their rich parents, so there's a lot of focus on April and her wanting what the rich kids have. Wil is super negative and sarcastic (can't really blame her considering her parents), so April's constantly on Wil about being bitchy and a spoiled brat for not appreciating what April herself had to work so hard to accomplish.

This book was kind of a let-down in a couple of areas. There are a lot of cliches: the popular kids are all mean, the love interest is s jock (and a bastard too boot), and the girls all get the message that being skinny is better than being a little heavy. I wasn't too fond of either of the girls, though I liked Wil a little more. April is too obsessed with wanting to impress the popular kids to the point where she ignores the people that like her for herself, and Wil is too much of a spoiled brat to be completely likable. This makes for a good summer or beach read, it's light and fluffy and full of the kind of high school drama that I encounter in my job every day...and hate with a passion.

Recommendation:
If you pick this up thinking it'll be a wonderful, deep story about being overweight in a skinny-obsessed world, you won't find it here. Pick this up if you're looking for a satisfying no-effort read.

Thoughts on the cover:
I like the s'mores image, fits with the camp theme. The solid green background is appealing. Not fond of the tag line though.
Posted by Andrea at 3:41 PM