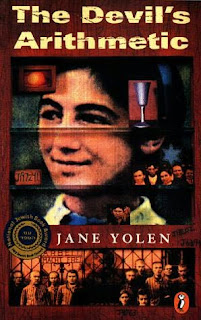 Summary:
From the back of the book:
When Hannah opens the door during Passover Seder to symbolically welcome the prophet Elijah, she suddenly finds herself in the unfamiliar world of a Polish village in the 1940s. Hannah had always complained about listening to her relatives tell the same stories of the Holocaust over and over, but now she finds herself in a terrifying situation. The Nazi soldiers have come to take the villagers away, and only Hannah can guess where they are going.

Review:
Another part of my old books kick that I'm on. I can't believe I never read this as a kid, especially considering the WWII/Holocaust stage I had in my reading when I was 11 (right after my grade 6 teacher read us The Diary of Anne Frank, and around the time I started to understand my grandfather's stories from the war that he used to tell me all the time). Since there is a plethora of novels on this subject out there, I usually prefer to use first-hand survivors accounts when using books on this subject matter for my students, it eliminates the "this couldn't have really happened, could it?" talk we go through; however, this is one of the better Holocaust historical fiction titles I've read.

Hannah tires of going through religious holidays and having to sit through the same stories told over and over again (it doesn't help that her grandfather is still living in the past and is severely traumatized 40 years after the fact). It's hard for Hannah to relate, but when she is chosen to open the door for Elijah at Passover and finds her self in 1940s Poland rather than 1980's New York City, she starts reliving the experiences of Chaya, the friend of her Aunt Eva's whom Hannah was named after (Hebrew name). Hannah/Chaya is taken with the rest of her village to an unnamed concentration camp and made to work. Along the way she meets Rivka, a ten-year-old that shares the tricks of how she has survived where others didn't.

I liked how the author made sure to describe Hannah's annoyances with her family when they continue to bring up their stories over and over, it's the same attitude many kids today still have over family history no matter what they may entail, so it's good to see the contrast between being miffed in the beginning and understanding and appreciating them at the end. The only thing I wish the book included was a cultural note at the end. There are so many unique Jewish references in the book that it was difficult to understand all aspects of the story, though I muddled through the basics just fine. I won't be a detriment, but I think if there was a cultural note explaining things I think it would add to a reader's understanding, especially a child reading it.

Recommendation:
Another great title in a list of Holocaust education materials.

Thoughts on the cover:
It could be better, but considering it's an old title and covers weren't so great back then, I'll forgive it.
Posted by Andrea at 11:14 PM