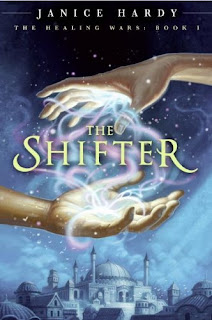 Summary:
From the author's website:
Nya is an orphan struggling for survival in a city crippled by war. She is also a Taker—with her touch, she can heal injuries, pulling pain from another person into her own body. But unlike her sister, Tali, and the other Takers who become Healers' League apprentices, Nya's skill is flawed: She can't push that pain into pynvium, the enchanted metal used to store it. All she can do is shift it into another person, a dangerous skill that she must keep hidden from forces occupying her city. If discovered, she'd be used as a human weapon against her own people.

Rumors of another war make Nya's life harder, forcing her to take desperate risks just to find work and food. She pushes her luck too far and exposes her secret to a pain merchant eager to use her shifting ability for his own sinister purposes. At first Nya refuses, but when Tali and other League Healers mysteriously disappear, she's faced with some difficult choices. As her father used to say, principles are a bargain at any price; but how many will Nya have to sell to get Tali back alive?

Review:
This book gets my thumbs up purely because of the original concept, but the execution of it and the moral questions it poses makes this a truly wonderful book. Nya's country of Geveg has been invaded by the Baseeri, who have also taken over neighbouring Sorille and have their eyes on Verlatta as well. With her parents dead and younger sister Tali an apprentice at the Healing League, 15-year-old Nya must rely on her cunning to help her survive...and sometimes her skill as a Taker. Nya's healing magic is different from her sister's. Whereas Tali can take pain from others and transfer it to the pynvium metal to store it, Nya can only shift that pain from one person to another. Their mother always warned Nya never to use her shifting, and it isn't until Nya gets caught up in bargains and exchanges to help Tali that she finally realizes why. Nya is approached by various people that discover her unique healing ability and want her help, some for not-so-honourable purposes. She faces a moral dilemma because she doesn't want to refuse to heal people in spite of the complications that might arise, but she also wants to rescue Tali and expose the Healing League for forcing their apprentices to heal despite the pynvium shortage.

Nya is a wonderful character who's smart, fiery, spunky, and loyal. She cares about her sister, and also about the effect her actions have on other people despite the fact that the majority of people now occupying Geveg (Baseeris) don't deserve her concern. The world building in this novel has been carefully done, with a lot of details as to the history, culture, and other everyday details. The atmosphere in the book reminds me a lot of Funke's The Thief Lord, possibly because a lot of the book has Nya running around the connected Geveg Islands over a bunch of bridges, which is similar to The Thief Lord's Venice setting. The writing has a unique sense of urgency told through Nya's point of view as she's trying to survive day-to-day and save Tali at the same time. The next installment, Blue Fire, is coming out later in the fall, so I'll definitely be picking that up to see where Nya's story goes.

Recommendation:
Good pacing, great writing, wonderful concept, and an excellent female lead character. Pair all that with a unique magic system, and you've got an impressive piece of fantasy fare.

Thoughts on the cover:
Love it. The dark and light blues and purples with the images of the hands in the centre make for a really dynamic cover.
Posted by Andrea at 3:13 PM