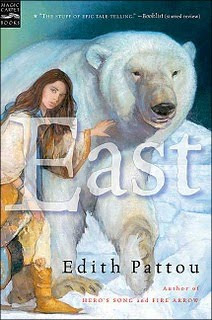 Summary:
From the back of the book:
Rose has always been different. Since the day she was born, it was clear she had a special fate. Her superstitious mother keeps the unusual circumstances of Rose's birth a secret, hoping to prevent her adventurous daughter from leaving home...but she can't suppress Rose's true nature forever. So when an enormous white bear shows up one cold autumn evening and asks teenage Rose to come away with him-in exchange for health and prosperity for her ailing family-she readily agrees. Rose travels on the bear's broad back to a distant and empty castle, where she is nightly joined by a mysterious stranger. In discovering his identity, she loses her heart-and finds her purpose-and realizes her journey has only just begun.

Review:
I'm a big fan of fairy tale retellings, and since I've read most of the Beauty and the Beast retellings out there, I thought I'd move to another favourite: East of the Sun, West of the Moon. The original fairy tale goes as such (my very rough version): girl meets bear, girl goes to castle with bear, girl discovers bear is really a man under an enchantment, girl goes on long journey to rescue bear-man from a troll princess/queen who put him under the enchantment to begin with. I always liked the story because the girl has to be ingenious to go about rescuing the prince rather than the other way around, and like Beauty and the Beast, there's a lot of material to work with as far as retellings go. I've already read Ice by Sarah Beth Durst, so I'll be comparing the two at certain points.

I loved East because of Rose, the narrative, and the plot. Rose was a wonderful heroine, strong, spunky, loyal etc. (all those good traits), so I cared about her and liked her right away. The author structures the story as a string of different first-person perspective entries: Rose, Rose's Father, Neddy (Rose's brother), The White Bear, and the Troll Queen. Most people probably would be apprehensive about this structure, but the author did an amazing job of keeping the voices of all the characters separate and unique so they didn't sound the same but flowed well together. She was also good at making sure you got just enough from each character at a time without overdoing it (except for Rose since she's the main character so she gets more screen time, as it were). I kind of wish we got to know the White Bear better, but more on that later. As for the plot, I'm not a big fan of the whole journey motif, they usually get insanely boring and I usually view them as a detriment to the plot rather than enhancing the plot. Luckily, East doesn't suffer from this; at all the stages of her journey, Rose meets her helper characters and they're all interesting and enhance the plot in their own way. I especially liked Thor and Tuki ^_^ The journey takes up a large portion of the book (about half), so I was pleased that I didn't even notice the book's length (almost 500 pages) while I was reading. Everything was so smooth and seamless, nothing dragged, which was the opposite of what I was expecting. The theme of the compass and cardinal directions was a nice touch too, it kept popping up with all the traveling references (and since it's 15th century Norway, a compass is all they've got) as well as the superstitions of Rose's birth.

The only thing I didn't like about East was what I felt to be a lack of development of the romance and the character of the White Bear himself. He gets the odd section to himself, but most of them are written in poetry rather than prose, so we get a very limited view of his personality and what he's thinking of. There was mention of his animalistic side warring with his human side, possibly winning over in the girls he tried to have break his curse before Rose...did he eat them or what? This is the character-building stuff I'd like to know. In traditional fairy tales you never question why the characters love each other, you go with the flow and what's stated is fact, mostly because the stories are so short. In a fairy tale retelling, I expect some good romantic development; I mean, c'mon, in 500 pages they couldn't delve a little more into why Rose and the White Bear love each other beyond keeping up their end of the bargain they entered into? Ice covered this area nicely, but suffered in other areas (namely the plot and character development in the second half). I'm convinced that if you took the background concept of Ice together with its romantic development and put it together with the plot of East, you'd have an awesome East of the Sun, West of the Moon retelling. I have some more of said retellings on the way, so I'll have some more to compare to in due time. Hopefully I'll find a version I really like that doesn't suffer from one glaring fault.

Recommendation:
Excellent example of a well-done fairy tale retelling. If the romance had been handled better, that would've given it the extra push into extraordinary, but oh well, you can't have everything you want in a book.

Thoughts on the cover:
It's okay but not stunning. I do like the way the title font blends in with the cover image so you don't see a stark difference between the image and the font.
Posted by Andrea at 8:15 AM