The Sky Is Everywhere - Jandy Nelson 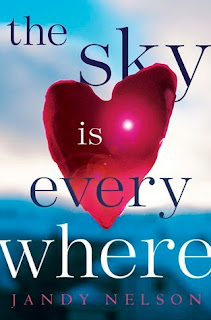 Summary:
From the author's website:
Seventeen-year-old Lennie Walker, bookworm and band geek, plays second clarinet and spends her time tucked safely and happily in the shadow of her fiery older sister, Bailey. But when Bailey dies abruptly, Lennie is catapulted to center stage of her own life--and, despite her nonexistent history with boys, suddenly finds herself struggling to balance two. Toby was Bailey's boyfriend; his grief mirrors Lennie's own. Joe is the new boy in town, a transplant from Paris whose nearly magical grin is matched only by his musical talent. For Lennie, they're the sun and the moon; one boy takes her out of her sorrow, the other comforts her in it. But just like their celestial counterparts, they can't collide without the whole wide world exploding.

Review:
I never would've read a book like this before my grandmother died, but now that I've experienced grief on that level, I feel like I can actually relate to these types of books. The Sky Is Everywhere is a story of Lennie going through the grief process after her older sister Bailey suddenly dies. It explores what grief does to a person and how it affects your choices. If you've ever experienced a loss like that or know someone who has, you know that grief does crazy things to a person and their behaviour will be affected by it. It's also a story of moving on with your life after a loss, and learning to live your life without that person in it, and this is where the book shines. The book blew me away; it was funny, sad, exasperating, and joyous all at the same time. Lennie is amazingly real as a character, and her feelings are magnified as you read through the snippets of vignettes, poems, and musings that are shown on little pieces of paper or objects interspersed throughout the novel. The love triangle is especially well-handled, Lennie is madly in love with Joe because he represents a new start (it helps that he never met Bailey), but is drawn to Toby because he is really the only one that is grieving on the same level as her. Even though I found myself berating Lennie for getting involved with Toby when she clearly needed to move on and get with Joe, I couldn't fault her for it because I know you do some pretty messed up things when you're grieving. The sky and colour imagery is just all over the place here, and is representative of coming alive after a part of you has died. This book is awesome on so many levels, it's hard to verbalize it, but this is a must-read book, if for nothing else than Lennie's hilarious narrating.

Recommendation:
Read this! Just read it!

Thoughts on the cover:
Considering how difficult it would be to pick an appropriate image for the cover, they did all right. Could've done without the heart shaped petal though and just stuck with the brilliant sky photo.
Posted by Andrea at 3:36 PM