Summary:
From Amazon.ca:
2097 is a transformed world. Thirty years earlier, a mysterious plague wiped out 97 percent of the male population, devastating every world system from governments to sports teams, and causing both universal and unimaginable grief. In the face of such massive despair, women were forced to take over control of the planet--and in doing so they eliminated all of Earth's most pressing issues. Poverty, crime, warfare, hunger . . . all gone.

But there's a price to pay for this new "utopia," which fourteen-year-old Kellen is all too familiar with. Every day, he deals with life as part of a tiny minority that is purposefully kept subservient and small in numbers. His career choices and relationship options are severely limited and controlled. He also lives under the threat of scattered recurrences of the plague, which seem to pop up wherever small pockets of men begin to regroup and grow in numbers.

And then one day, his mother's boss, an iconic political figure, shows up at his home. Kellen overhears something he shouldn't--another outbreak seems to be headed for Afterlight, the rural community where his father and a small group of men live separately from the female-dominated society. Along with a few other suspicious events, like the mysterious disappearances of Kellen's progressive teacher and his Aunt Paige, Kellen is starting to wonder whether the plague recurrences are even accidental. No matter what the truth is, Kellen cares only about one thing--he has to save his father.

Review:
As soon as I read the summary for this book, I knew I had to read it, the plot sounded incredible. It delivers on that front.

Kellen Dent is 14 years old in 2097, living in a world devastated by Elisha's Bear, a virus that killed 97% of the world's male population thirty years earlier. Now an agency called the PAC regulates the remaining men's behaviour, as well as the number of new baby boys allowed to be born. Boys are treated as second-class citizens and options for their futures are limited in a world run by women.

Epitaph Road asks questions my history teachers and professors have been asking for years: would the world be a different place if it were run by women rather than men? There's no question that Kellen's world was headed for disaster before the virus struck-social systems were exhausted, the environment was stressed beyond repair, and crime rates were at an all-time high. Kellen himself even admits that the world he lives in is much improved, except for the restrictions placed upon men, and anyone would sympathize with the male characters when upon reading about the hurdles they have to jump through just to be viewed as safe and suitable to be around the female majority. I loved the plot of this novel, and the world-building is well-established in the first half of the book. Unfortunately, even though the plot is unique and promising, the development of the characters really falls flat. Kellen is easy to identify with because of what he has to go through as a boy, but the young female characters, Tia and Sunday, are so one-dimensional it hurts. Readers never get to see what makes them tick, their actions would've made sense if they perhaps lost a relative to Elisha's Bear and thus wanted to help Kellen because they identified with him, but we never anything that deep. I would've also liked to see the adult characters explored a little more, like Kellen's mom and the director of the PAC, their characters were really intriguing.

There was one really clever thing I absolutely loved: the epitaphs that begin each chapter. The book's namesake is a roadside memorial with revolving electronic epitaphs for all the male victims of Elisha's Bear. The author begins each chapter with an epitaph for a victim, so you get little snippets of the variety of people that died, from infant baby boys to newlywed husbands to abusive ex-partners. It provokes empathy and really makes you feel the scope of the epidemic, it actually made me think about what I would do if all the men in my life were to perish all at once in a similar manner. This books poses some extremely thought-provoking questions, and although I was disappointed about the lack of character depth, I still really enjoyed it.

Recommendation:
It's worth a read if just for the thought-provoking plot, but if you're big on character development you won't find that here.

Thoughts on the cover:
The cover is kinda bleh. I like the image of Kellen walking on Epitaph Road, but the girls' faces in the sky don't make much sense unless they're supposed to represent the oppression of men by the female majority, but they just end up looking creepy. An alternate cover (from the ARC I think) is circulating around the internet, and even though it's not fancy either, I like it much better (see below). 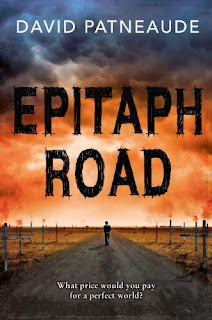