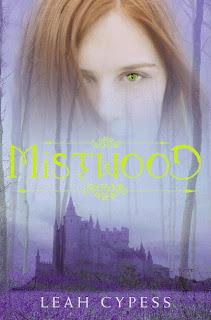 Summary:
From the inside cover:
The Shifter is an immortal creature bound by an ancient spell to protect the kings of Samorna. When the realm is peaceful, she retreats to the Mistwood. But when she is needed she always comes.

Prince Rokan needs Isabel to be his Shifter. He needs her ability to shift to animal form, to wind, to mist. He needs her lethal speed and superhuman strength. And he needs her loyalty—because without it, she may be his greatest threat.

Isabel knows that her prince is lying to her, but she can’t help wanting to protect him from the dangers and intrigues of the court . . . until a deadly truth shatters the bond between them.

Now Isabel faces a choice that threatens her loyalty, her heart . . . and everything she thought she knew.

Review:
This has been on my radar for quite some time (being compared to Kristin Cashore's Graceling caught my eye) and unfortunately was relegated to the bottom of the reading pile. It was such an enjoyable read I wish I'd read it earlier! Mistwood is another high fantasy title, and one of the best things about it in my opinion was it's simplicity. It might sound as if I'm giving it a backwards compliment, but allow me to explain. When I read a high fantasy title, the reason that they are a hit or miss for me is mostly because they're (in my opinion) unnecessarily complicated. Half the time there's so many characters and sub-plots to follow and political alliances to chart out that I just end up losing interest. Mistwood concentrates mostly on Isabel throughout the whole novel, with touches on the political climate and the secondary characters' place in it, so the focus is never far away from her. Most people would think this detracts from the development of the secondary characters, but that's far from it. Clarisse was probably one of the most intriguing characters I've encountered in a long time due to the fact that she's so well developed you have no clue where her loyalties lie. Probably the only character I felt could've been developed more was Kaer, but I was pleased with the development of all the others.

The writing of Mistwood was solid in its simplicity. It wasn't complicated for the sake of being haughty, but still managed to be very eloquent and to the point. Its themes of understanding one's self in the midst of other people's expectations, loyalty, and being careful of who you trust, are well illustrated and woven throughout the book. Isabel's plight is really well explored, plus I love a good story that explores what it means to be human. I have to give the plot a lot of credit, I was guessing right up until the end of the novel, which is saying something. The only thing I had a beef with was that I didn't think the romance was explored enough. It's understandable to think that Isabel could love Rokan because of her nature and the fact that he's the first person she's seen etc. I felt I needed to see some more interaction to believe that Rokan could love her back, it just didn't feel real on his end. Aside from that, I loved all aspects of this book, another one of my best reads for the year so far.

Recommendation:
Another good example of YA high fantasy. If you're constantly frustrated by overarching plots and more characters to keep track of than students in your classroom, read this instead!

Thoughts on the cover:
I love the purple colour scheme (purple is an underrepresented colour in your average book cover). I also like how the lavender flowers blend in with the mist/fog of the castle so you think you're actually looking at the Mistwood itself. Isabel's head is photoshopped nicely too, well blended. I like how they showed the Shifter's famous green eyes, and the fact that they used her default hair colour (red-brown) rather than the blonde she purposely uses.
Posted by Andrea at 4:31 PM