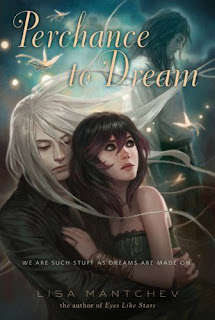 Summary:
From the inside cover:
We are such stuff as dreams are made on.

Growing up in the enchanted Thèâtre Illuminata, Beatrice Shakespeare Smith learned everything about every play ever written. She knew the Players and their parts, but she didn’t know that she, too, had magic. Now, she is the Mistress of Revels, the Teller of Tales, and determined to follow her stars. She is ready for the outside world.

But the outside world soon proves more topsy-turvy than any stage production. Bertie can make things happen by writing them, but outside the protective walls of the Thèâtre, nothing goes as planned. And her magic cannot help her make a decision between—

Nate: Her suave and swashbuckling pirate, now in mortal peril.

When Nate is kidnapped and taken prisoner by the Sea Goddess, only Bertie can free him. She and her fairy sidekicks embark on a journey aboard the Thèâtre’s caravan, using Bertie’s word magic to guide them. Along the way, they collect a sneak-thief, who has in his possession something most valuable, and meet The Mysterious Stranger, Bertie’s father—and the creator of the scrimshaw medallion. Bertie’s dreams are haunted by Nate, whose love for Bertie is keeping him alive, but in the daytime, it’s Ariel who is tantalizingly close, and the one she is falling for. Who does Bertie love the most? And will her magic be powerful enough to save her once she enters the Sea Goddess’s lair?

Once again, LISA MANTCHEV has spun a tale like no other—full of romance, magic, adventure, and fairies, too—that readers won’t want to put down, even after the curtain has closed.

Review:
Eyes Like Stars was probably one of the best books I've read so far this year, so of course when I found out that the author was writing a sequel, Perchance to Dream became one of my most anticipated reads. It doesn't disappoint either, the same things I loved about Eyes Like Stars are in Perchance to Dream. The dialogue is intelligent and witty with a lot of theatre references, and the fairies (Moth, Cobweb, Mustardseed, and Peaseblossom) are hilarious and steal the show. The book takes place right after Eyes Like Stars ends and there isn't a lot of a recap, so some readers might want to read Eyes Like Stars again for a refresher. Bertie and company are off to rescue Nate from Sedna's clutches and find Bertie's father, and even though everything Bertie writes comes true, things aren't easy for the traveling troupe.

The whole journey motif was a little crazy at times. Since they weren't confined to the theatre anymore it was sometimes hard to follow exactly where everyone was and what was happening, whereas I didn't have that issue in Eyes Like Stars. That was probably my only complaint about the book, everything else just comes together in a wonderful little literary package. The writing is incredible, witty, the love triangle is actually well presented, and of course, there's the fairies. I can't get over how much I love these fairies, I was laughing my head off reading their dialogue. I also liked how this book talks more about Bertie's view of herself, both in terms of her relationships with the boys and her own powers since discovering her parentage. There aren't enough words to describe how imaginative and impressive the story is, it's really something you just have to read for yourself and get on the fan bandwagon. There is still the third book left to conclude to story, so of course that's already on my list of must-reads for next year.

Recommendation:
If you've read Eyes Like Stars, you've already read this by now. If not, read the first book so you can get hooked on this series like everyone else!

Thoughts on the cover:
I'm going to take a minute to gush about this cover artist for a minute. The artist, Jason Chan, is officially my favourite cover artist. I didn't realize it at the time, but he's done covers for some books I've already read. I don't think it's a coincidence that I've loved all the books he's done covers for: Eyes Like Stars and The Girl Who Could Fly (both read back in February), and he's also drawn the UK cover art for The Hunger Games (those really well-drawn pics of Katniss and Peeta that are circulating around the internet). His cover for Perchance to Dream is amazing, I love how Bertie is in Ariel's arms but is looking up towards Nate. Can't wait to see the cover for the third book (and he'd better be the cover artist!).
Posted by Andrea at 4:53 PM