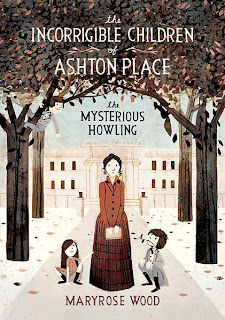 Summary:
From the publisher's website:
Of especially naughty children it is sometimes said: "They must have been raised by wolves."

The Incorrigible children actually were.

Found running wild in the forest of Ashton Place, the Incorrigibles are no ordinary children: Alexander, age ten or thereabouts, keeps his siblings in line with gentle nips; Cassiopeia, perhaps four or five, has a bark that is (usually) worse than her bite; and Beowulf, age somewhere-in-the-middle, is alarmingly adept at chasing squirrels.

Luckily, Miss Penelope Lumley is no ordinary governess. Only fifteen years old and a recent graduate of the Swanburne Academy for Poor Bright Females, Penelope embraces the challenge of her new position. Though she is eager to instruct the children in Latin verbs and the proper use of globes, first she must help them overcome their canine tendencies.

But mysteries abound at Ashton Place: Who are these three wild creatures, and how did they come to live in the vast forests of the estate? Why does Old Timothy, the coachman, lurk around every corner? Will Penelope be able to teach the Incorrigibles table manners and socially useful phrases in time for Lady Constance's holiday ball? And what on earth is a schottische?

Review:
After I read the first few chapters of this book, the first things that came to mind were the first half of The Sound of Music and Jane Eyre...because that's essentially what this is. This book is so charming, it's similar to all those old classic stories about governesses and their charges and yet spoofs them at the same time in an intelligent way. I can totally picture a pre-tv era grandmother or grandfather sitting in a rocking chair telling this story to enraptured grandchildren, those of you that get the image will know exactly what kind of book this is. I loved how the children talk in howls and woofs, they even say their names that way (Alawoooooo, Beowoooooo, and Cassawoof), and Penelope indulges them by allowing them to call her Lumawooooo. Penelope herself is only fifteen, so teen readers might get a kick out of her if they're not immediately excited by the concept of children being raised by wolves, although "kids raised by wolves" was all it took to get me hooked. The writing style is reminiscent of the older classics but not enough so as to alienate modern young readers. The plot promises a series to answer the questions of how the children came to be at Ashton Place, and so far it actually seems plausible that this could be a series, which pleases me to no end. This book is immensely charming and quirky, I absolutely love it, this is one book I'd save to read to my future kids or a junior class of students.

Recommendation:
Read this! Just trust me, you and any kids in your vicinity will love it.

Thoughts on the cover:
This cover reminds me of really old children's books from the 1960s, it's just so kitschy. The cover artist is also the illustrator for the black and white pictures interspersed throughout the novel, which I also liked.
Posted by Andrea at 5:49 PM