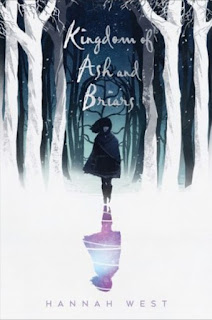 Bristal, an orphaned kitchen maid, lands in a gritty fairy tale gone wrong when she discovers she is an elicromancer with a knack for shape-shifting. An ancient breed of immortal magic beings, elicromancers have been winnowed down to merely two-now three-after centuries of bloody conflict in the realm. Their gifts are fraught with responsibility, and sixteen-year-old Bristal is torn between two paths. Should she vow to seek the good of this world, to protect and serve mortals? Or should she follow the strength of her power, even if it leads to unknown terrors? Time is running out as an army of dark creatures grows closer and the realm faces a supernatural war. To save the kingdoms, Bristal must find the courage to show her true form.

Review:
The summary above doesn't do this story justice, save for the final paragraph that praises the book and lists the hints of other stories found within, all of which I wholeheartedly agree with.

Bristal is kidnapped from the manor home where she serves and is brought to the Water in the Forest of the West Fringe, a large body of water with the ability to discern and identify elicromancers, individuals with various magic abilities. When the two existing elicromancers, Brack and Tamarice, rescue her from captors who would use her newly gifted elicrin stone for harm, Bristal sees that she must choose between the morals of her two mentors. Brack believes elicromancers must stand at the sidelines and guide humanity without taking power themselves, while Tamarice believes that helping humans is a waste of their powers and that elicromancers should rise to their former glory. Bristal makes her choice when Tamarice turns to dark elicromancy and curses the newly born princess of Volarre and binds the other nobles in all of Nissera to the princess' fate. Using her unique shape-shifting abilities, Bristal disguises herself as an elderly woman and hides Princess Rosamund in Plum Valley, far from Tamarice and her spies. As the years pass, Bristal uses her powers to help unite the three kingdoms in Nissera that had always been quite combative, all while keeping Rosie (and in turn all Nisseran nobles) alive.

This book does borrow elements from classic tales, but when they're combined it creates a wholly unique tale. Rosie is cursed at birth by Tamarice just like Sleeping Beauty, and Bristal plays fairy godmother to Elinor ala Cinderella so she can meet and marry Prince Charles and unite their two respective kingdoms through marriage. Like in Mulan, Bristal takes on the form of a man so she can join the army with Anthony so she can get to know and influence him (and ultimately falls in love with him). The elicromancers and their magic are similar to other types from other stories we've seen before, but the depth of it makes the similarities merely superficial. Bristal as a character is likeable, she's determined and sticks to her morals, but she's not always confident and questions herself. There really wasn't a character I disliked, they're all nicely developed (even Tamarice) and no one really bugged me, which is rare.

Recommendation:
A well-written high fantasy that pulls from classic fairytales, so it feels familiar yet new and engaging at the same time.

Thoughts on the cover:
I like the colour scheme, and the image of Bristal where you can't quite see the details of her face is unsettling just enough to make it intriguing.
Posted by Andrea at 7:39 PM