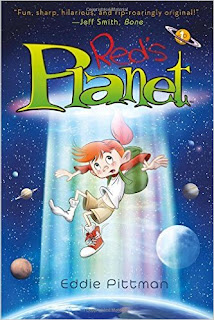 Red, a quirky, headstrong ten-year-old, longs to live in her own perfect paradise far away from her annoying foster family. But when a UFO mistakenly kidnaps her, Red finds herself farther away than she could have possibly imagined - across the galaxy and aboard an enormous spaceship owned by the Aquilari, an ancient creature with a taste for rare and unusual treasures.

Before Red can be discovered as a stowaway, the great ship crashed on a small deserted planet, leaving her marooned with a menagerie of misfit aliens. With her newfound friend, a small fray alien named Tawee, Red must find a way to survive the hostile castaways, evade the ravenous wildlife, and contend with Goose, the planet's grumpy, felinoid custodian. Surely this can't be the paradise she's looking for.

Review:
There seems to be a slew of awesome middle-grade graphic novels coming out lately, which I won't complain about, especially since this one in particular will certainly appeal to many younger readers.

Red (which isn't her real name) is ten, and has been in and out of various foster homes because she keeps running away in search of the paradise she wants to live in. When the cops pick her up from the latest incident with the intent of taking her to an institution, she is momentarily saved by a UFO that steals the police cruiser while she is alone inside it. When said ship crash lands on a near-empty planet, Red and the other survivors must figure out a way to live until they are rescued, especially when the planet's guardian (who looks like a big blue version of Tony the Tiger) is rather reluctant to help them.

This is part of a series that'll be continuing in 2017, so I'm hoping that my only issue with this book will be resolved with more instalments. I like Red as a character, she's spunky and strong; but, along with the all the other characters, they're just not much to them even after a whole book. For younger readers that care more about the story than character development, this won't make or break their interest, but more sophisticated readers might take issue with it.

Recommendation:
A science-fiction story that will be sure to engage reluctant readers, complete with art that is aesthetically pleasing.

Thoughts on the cover:
A really dynamic and colourful choice of image, it really grabs your attention.
Posted by Andrea at 10:35 AM