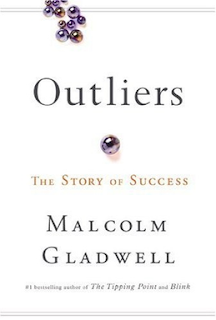 Why do some people succeed far more than others?

There is a story that is usually told about extremely successful people, a story that focuses on intelligence and ambition. In Outliers Malcolm Gladwell argues that the true story of success is very different, and that if we want to understand how some people thrive, we should spend more time looking around them-at such things as their family, their birthplace, or even their birthdate. The story of success is more complex-and a lot more interesting-than it initially appears.

Outliers explains what he Beatles and Bill Gates have in common, he extraordinary success of Asians at math, the hidden advantages of star athletes, why all top New York lawyers have the same resume, and the reason you've never heard of the world's smartest man-all in terms of generation, family, culture, and class. It matters what year you were born if you want to be a Silicon Valley billionaire, Gladwell argues, and it matters where you were born if you want to be a successful pilot. The lives of outliers-those people whose achievements fall outside normal experience-follow a peculiar an unexpected logic, and in making that logic plain Gladwell presents a fascinating and provocative blueprint for making the most of human potential.

Review:
This book is touted so often in education, it's been on my to-read list for a while now. After reading it, I can see why it's talked about so often, but that there's really only one chapter that can be applied to the education field.

Though numerous examples, the author makes his claim that success isn't just about ambition and intelligence, that it has more to do with opportunities, which are more likely to be given to people who were lucky enough in certain circumstances. For example, Bill Gates was born in the mid 50s (meaning he was the right age in the 70s when the computer industry took off), and was also lucky enough to be born into a wealthier family that sent him to a school that could afford a computer in the late 60s that he was able to use to practice coding on. Without those, it could be argued that he wouldn't have been as successful as he is today. Same with the top hockey players, most of which have birthdays in the first few months of the calendar year versus the end. Because those with earlier birthdays tend to be bigger and stronger than those with later birthdays, they are the ones picked for the more intensive teams, benefitting from the extra practice and end up being more successful and go pro more often than their younger counterparts.

The education chapter wasn't anything ground-breaking for anyone who actually works in education, but I'm sure would be eye-opening for those that are not. He argues that a longer school year in a culture with an emphasis on hard work, diligence, and persistence ("grit" as we call it in our professional development talks), makes for students more likely to be accepted into better schools, making them more likely to be given opportunities that lead to success later in life. That children from lower income families tend to lose a large chunk of their learning over the long summer break, which cumulates over time, contributing to the achievement gap that we as educators so often try to fix to no avail.

In a way, this book is fascinating in that it destroys the common belief that success is entirely in a person's control, that all you need is a bootstraps mentality and if you don't succeed, then you just aren't working hard enough. It offers another story: that culture, class, and circumstance matters; and that if all people were awarded similar opportunities regardless of said factors, that we would have more successful people across all areas.

Recommendation:
A thought-provoking read that is well-known for a reason, I'm glad I finally got around to reading it.

Thoughts on the cover:
Simple yet effective.
Posted by Andrea at 5:50 PM