The Other Boy - M.G. Hennessey 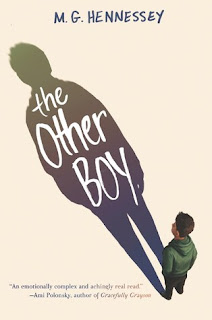 Twelve-year-old Shane Woods is just a regular boy. He loves pitching for his baseball team, working on his graphic novel, and hanging out with his best friend, Josh. But Shane is keeping something private, something that might make a difference to his teammates, to Josh, and to his new crush, Madeline. And when a classmate threatens to reveal his secret, Shane's whole world comes crashing down. It will take a lot of courage for Shane to ignore the ridicule and hates and show the world that's he's still the same boy he was before. But in the end, those who stand beside him may surprise everyone, including Shane.

M.G. Hennessey's timely story beautifully captures Shane's journey toward acceptance and empathy and speaks to all those who have struggled to remain true to themselves.

Review:
Thankfully there are more diverse children's and young adult books coming out in recent years, and I'm really thankful for this particular book after reading it, especially considering that aimed at middle grade readers.

Shane is in the sixth grade and is your average twelve-year-old boy. But there's one thing about Shane that isn't like all the other boys, Shane is transgender and was born biologically female. Shane's parents are divorced and he and his mom moved from San Francisco to Los Angeles a few years ago, at which point Shane transitioned and went on hormone blockers to delay female puberty. Shane faces a few key issues in this book: he has a strained relationship with his father, who isn't as accepting of his identity as his mother; he wants to begin taking testosterone so he can actually start looking like the boy he is, and a classmate discovers Shane's secret and reveals it to everyone at school.

I really liked the way Shane was presented in the book, you can tell the author did her homework and made sure to treat Shane and the issues he and his family face with the utmost respect. Shane's mother, Rebecca, is amazing and supportive, which is probably the reason why Shane is able to rise to the challenges that he faces. Most of the relationships Shane has are realistic in my opinion, except the portrayals might be a little too optimistic compared to those someone might face in a  rural/conservative area, and this is my only issue with the book, which is minor. Panels from Shane's graphic novel are illustrated as end pieces to some chapters, which is a really lovely addition to the book. The author also includes websites and phone numbers for trans support groups, which I always like to see for books like these.

Recommendation:
This is one of the first middle grade books with a main character who is trans (that I know of) that I've encountered, and it is wonderfully written and a sensitive portrayal of a transgender boy's experience. This is a book that should be in every classroom.

Thoughts on the cover:
Simple but effective.
Posted by Andrea at 9:32 PM