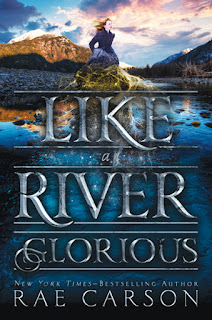 Lee Westfall survived the dangerous journey to California. She found a new family in the other outcasts of their wagon train, and Jefferson, her best friend, is beginning to woo her shamelessly. Now they have a real home-one rich in gold, thanks to Lee's magical ability to sense the precious metal in the world around her.

But Lee's Uncle Hiram has survived his own journey west. He's already murdered her parents, and he will do anything to have Lee and her talents under his control. No one is safe. When he kidnaps her, she sees firsthand the depths of his depravity.

Lee's magic is changing, though. It is growing. The gold no longer simply sings to her-it listens. It obeys her call. Will that alone be enough to destroy her uncle?

The second book of Rae Carson's acclaimed Gold Seer trilogy takes us deep into the heart of the gold fields and continues the epic story of an unforgettable heroine.

Review:
After reading The Girl of Fire and Thorns series years ago and loving it to pieces (and turning many a reader on to it), I had a feeling that this particular author was one of those rare ones that I would love anything they wrote. Her new series hasn't disappointed me so far. After reading Walk on Earth a Stranger last year, it proved to be just as engaging and lovely as her previous series. This book is the second in her newest series, more of an historical fiction than heavy fantasy. The best part of this book is that it doesn't suffer from second-book syndrome (or Bridge Book Syndrome as I have dubbed it), it is just as exciting as the first book with none of that awful lag that so many middle books in a trilogy suffer from.

Leah has survived the trip from Georgia to California with most of her original party intact, choosing to settle in an area they name Glory. As they stake out their claims and pan for gold, Lee tells everyone the truth about her talent and that her uncle Hiram will surely come after her, and subsequently, the others. When Hiram's men kidnap Leah and imprison Jefferson and Tom, the trio must work together with the Chinese and Indian workers to overthrow Hiram and his men and return home to their friends in Glory.

This instalment manages to refresh the reader's memory right from the start, and continues on with a brisk pace that doesn't lag. Leah is still a great female protagonist, trying to be as independent as a woman during the mid 1800s could possibly be. I have to give the author credit in doing her research on the historical period she's writing about, it's incredibly detailed. The accounts of Asian immigrants and Native Americans in California during this time period were incredibly interesting and is a historical aspect I don't often encounter in fiction.

Recommendation:
An excellent second book in a wonderful series by an incredible author. Need I say more?

Thoughts on the cover:
Oh so pretty. I like the continuation from the first cover to this one. Hopefully the third book continues this trend.
Posted by Andrea at 8:45 PM