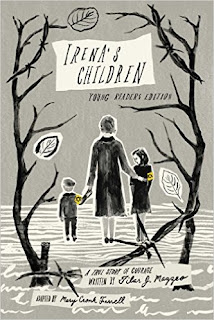 This young readers edition of Irena's Children tells the incredible untold story of Irena Sendler, a courageous Polish woman now nicknamed "the female Oskar Schindler" who saved the lives of 2,500 children during one of the worst times in modern history. With guts of steel and unfaltering bravery, Irena smuggled children out of the walled Jewish ghetto in Warsaw. She put them in toolboxes and coffins, snuck them under overcoats at checkpoints, and slipped them through the dank sewers and into secret passages that led to abandoned  buildings, where she convinced her friends and underground resistance network to hide them.

In this heroic tale of survival and resilience in the face of impossible odds, New York Times bestselling author Tilar J. Mazzeo and adapter Mary Cronk Farrell share the true story of this bold and brave woman, overlooked by history, who risked her life to save innocent children from the horrors of the Holocaust.

Review:
I was first introduced to Irena Sendler through films and documentaries a few years ago, and now many of my co-workers use her in conjunction with Schindler to teach students about acts of resistance and bravery during the Holocaust.

This is an adaptation of the author's original book intended for a younger audience. I won't necessarily say its middle grade because I think your average ten-year-old would have issues navigating this book (just in terms of the difficulty of the content), but I think a mature twelve or thirteen-year-old or older wouldn't have a problem. The book begins with the occupation of Poland in 1939 and introduces us to Irena, a social worker collaborating with co-workers to forge records allowing for poor Jewish families to qualify for welfare benefits where they otherwise wouldn't. When Germany invades and occupies Poland forces the Jewish population of Warsaw into the ghetto, Irena eventually realizes that the Germans intend to eradicate them and begins to make plans to smuggle children out of the ghetto to safety.

The author really did their research, there's so many details that you don't see in the films included here, including information on Irena from the post-war period. This is a great resource showing exactly the risks she took to do what she did, perfect for teaching solidarity and social justice.

Recommendation:
A wonderful text geared for younger readers about a modern day hero that is often overlooked in history.

Thoughts on the cover:
Interesting choice using a drawing for the children's version when the adult version of the same book used a photograph on the cover.