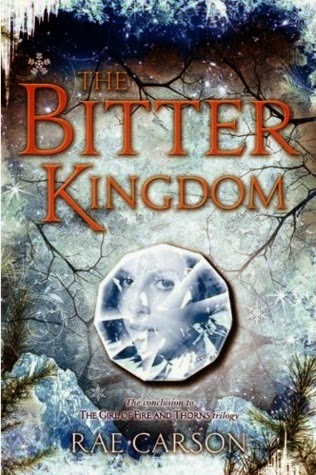 Elisa is a fugitive.

Her enemies have stolen the man she loves, and they await her at the gate of darkness. Her country is on the brink of civil war, with her own soldiers ordered to kill her on sight.

Her Royal Majesty, Queen Lucero-Elisa ne Riqueza de Vega, bearer of the Godstone, will lead her three loyal companions deep into the enemy's kingdom, a land of ice and snow and brutal magic, to rescue Hector and win back her throne. Her power grows with every step, and the shocking secrets she will uncover on this, her final journey, could change the course of history.

But that is not all. She has a larger destiny. She must become the champion the world has been waiting for.

Even of those who hate her most.

Review:
I'm a bit sad to see this series go, it was one of my recent favourites. The Girl of Fire and Thorns and The Crown of Embers were excellent books that have coveted spots on my bookshelf, the second book even moreso than the first, which is unusual for a trilogy (usually the first book rocks and the second book is a bit of a let-down).

The Bitter Kingdom picks up where The Crown of Embers left off, with Elisa headed off to Invierne to rescue Hector after the Invierno attacks. This book is packed from the beginning with Hector's rescue and the journey to Invierne for negotiations, to the journey back to Joya D'Arena to reunite the kingdoms. The section on the journey back to Joya D'Arena dragged a little, but that was pretty much my only complaint about the whole book.

Elisa proves herself even more the strong heroine than she already is, managing to rescue her lover yet again, unite several kingdoms and halt a war, and improve relations between two races while she's at it. She really is the best protagonist I've seen in a while: intelligent, strong, cunning, independent, and loyal; while having enough vulnerabilities to remain realistic. Storm gets a lot more character development in this book, which I love; and we're introduced to spunky Mula who tags along with the group after Elisa rescues her from slavery.

I can't say more for fear of spoilers, but trust me that this is an appropriate end for the series.

Recommendation:
A satisfying conclusion to a well-loved series, I'm sad to see it end.

Thoughts on the cover:
Keeping the continuity with the first two books, this time we have a wintery background to reflect the Invierne setting, with Elisa's face reflected in the Godstone at the bottom with a blue, white, and silver colour scheme.