She Is Not Invisible - Marcus Sedgwick 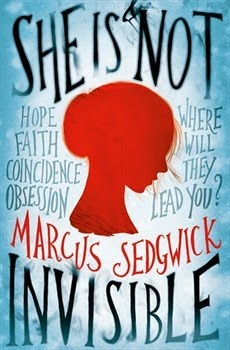 Is it coincidence or something more sinister that draws them together? Many strange things collide in Laureth Peak's life one hot August weekend.

Perhaps strangest of all is the way her dad had been acting lately. And now he's disappeared. It looks as if his obsession with coincidence might have fatal consequences.

As Laureth sets off for New York with her strange younger brother, Benjamin, she has little faith in herself. But she has a burning determination to find her missing father. She has just one clue to follow; his notebook. Does it contain salvation, or madness?

Review:
The reason I picked this up is because the blurb I initially read was different from the one above, it mentioned right off the bat that Laureth was blind.

Laureth's dad is a writer, and even though he's away a lot, she has noticed his recent behaviour: that he hasn't called or texted in the past few days, and one of his infamous notebooks turns up halfway around the world from where he told his family he was staying. After getting the run around from her mother, Laureth decides to take matters into her own hands and travels from London to New York City to track down her father. However, since she is blind, she takes her 7-year-old brother along to act as her eyes, especially since he is an advanced reader. Getting to New York was relatively easy, but finding their dad is more of a challenge. Using the notebook to look for clues to his whereabouts, Laureth discovers that her dad's preoccupation for coincidences has lead to near obsession: researching scientists that themselves researched coincidence and realizing they all committed suicide. As she goes through clue after clue without results, Laureth reluctantly begins to believe that something serious might have happened to her dad.

This is a really engaging story, it starts off with Laureth narrating on how she 'abducted' her little brother and how she managed to navigate the process to get to New York as a blind person. Benjamin, her little brother, is precocious and adorable and steals a lot of the scenes, especially when he brings Stan the stuffed raven along. The descent into their dad's 'madness' was really well handled, just creepy enough to keep you interested but not crazy enough to turn you off. I especially liked the theme that Laureth wants to prove herself capable since she feels people treat her as if she's invisible due to her condition, and that she gets a little over her head and has to admit to it.

Recommendation:
A wonderful exciting story with a great protagonist in Laureth.

Thoughts on the cover:
A little too much text around Laureth's head, but a good choice with the silhouette in profile.
Posted by Andrea at 9:26 PM