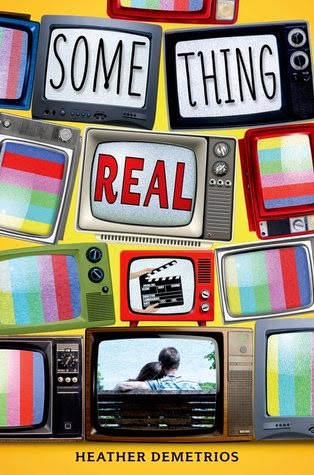 Seventeen-year-old Bonnie Baker has grown up on TV - she and her twelve siblings are the stars of a one-time hit reality show Baker's Dozen. Since the show's cancellation, Bonnie has tried to live a normal life, under the radar and out of the spotlight. But it's about to fall apart...because Baker's Dozen is going back on the air. Bonnie's mom and the show's producers won't let her quit, and soon the life that she has so carefully built for herself, with real friends (and maybe even a real boyfriend), is in danger of being destroyed by the show. Bonnie needs to do something drastic if her life is ever going to be her own - even if it means being more exposed than ever before.

Review:
I picked this up purely because the premise really intrigued me...and I always wondered how kids featured heavily on reality TV adjust (or not) to such a lack of privacy. This was a really amazing read that grabs you right from the beginning and makes you care about Bonnie and her siblings, wondering if they'll ever get to live their lives on their own terms.

Bonnie's parents married young and wanted thirteen kids to match the baker's dozen idea invoked by their last name. Unable to get pregnant, they contacted MetaReel, a production company, with their idea. Captivated, the company paid for money for a surrogate and fertility treatments, which resulted in Bonnie (biological child) and her twin siblings Benton and Lexie of the same age (surrogate). Afterwards, the company paid for international adoption fees, which resulted in yet more siblings from all over the world, as well as a few children adopted from domestic foster care until they reached the magic number of thirteen kids. Bonnie is the only child whose birth was televised, and all of the children have grown up surrounded by cameras. Just as the show explodes in popularity after over a decade's worth of seasons, in comes the drama of their father Andrew's drinking, the subsequent divorce, and Bonnie's suicide attempt at age thirteen, which prompted the show's cancellation. After four years of psychiatrists and therapy, Bonnie has renamed herself Chloe and attends her local highschool with her brother Benton. Their friends and neighbours are unaware of who the kids really are, and for the most part are happy with their new lives. When they arrive home to camera crews and wardrobe carts flooding their living room, they know their mother has gone back on the promise that they would never do the show again. Blackmailed by MetaReel to cooperate, and knowing their parents need the money the show provides, Bonnie struggles to cope with the loss of privacy and the constant intrusion. When Bonnie and Benton realize anything about themselves is up for grabs and their parents will do nothing to protect them, they take matters into their own hands.

This was an amazing look into what happens when people have no privacy allowed to them and live their lives in front of a camera. Bonnie and her siblings have issues, many due to the personas the television show created for them to play: Bonnie tried to commit suicide, Benton drinks to cope with the fact that he doesn't want his sexual orientation to be exposed, Lexie is highly promiscuous, some of the younger boys are overly aggressive, the youngest girls shriek to make themselves heard, and the middle ones delve into books to escape. I wanted to slap their mother, Beth, on more than one occasion for treating her children like cash cows rather than as children that need protecting. All the kids' names have a trademark symbol (TM) inserted beside them whenever they are printed in the book, which reinforces that even their own names aren't really theirs, it shows another way in which MetaReel owns them. The way Bonnie and Benton fight back is really admirable, and it reinforces the notion to readers to stand up and advocate for yourself because no one else will. The romance angle with Bonnie and Patrick seemed a little too perfect and idealistic, but that wasn't the main focus of the book so I could forgive the cavity-inducing sweetness of it. I loved Benton as a a character, he stole the book for me. Plus it portrayed a really positive homosexual relationship, which is always a plus in YA literature.

Recommendation:
An intriguing read on a rarely-explored but curious topic, with realistic characters that make the story.

Thoughts on the cover:
Very appropriate with the tv screens in various modes.
Posted by Andrea at 12:10 PM