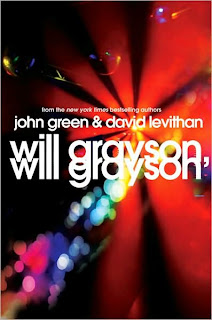 Summary:
From the inside cover:
It isn't that far from Evanston to Naperville, but Chicago suburbanites Will Grayson and Will Grayson might as well live on different planets. When fate delivers them both to the same surprising crossroads, the Will Graysons find their lives overlapping and hurtling in new and unexpected directions. With a push from friends new and old-including the massive, and massively fabulous, Tiny Cooper, offensive lineman and musical theater auteur extraordinaire-Will and Will begin building toward respective romantic turns-of-heart and the epic production of history's most awesome high school musical.

Review:
I have been meaning to read this forever. Aside from receiving glowing praise, it also deals with homosexual characters, which I always try to seek out books with since I think YA can always use more diverse characters. To make it easier to differentiate between both Wills, one will be referred to as "straight Will" and the other as "gay Will", so I apologize if I offend anyone (I'm a very open-minded and liberal person), but this makes it easier to tell the two apart.

John Green's books have been a hit or miss with me (yes, I uttered the blasphemy that I don't adore everything John Green writes), but this one is unique in that he co-wrote this with David Levithan. Normally books written by multiple authors don't always work since each writer has a different style and sometimes they awkwardly mash together. This isn't the case in Will Grayson, Will Grayson since the book is narrated by both Wills in alternate chapters, so each author wrote one of the boys. Each boy's personality comes through the smallest details in the text: the straight Will writes more or less properly, how I teach my students to write. Gay Will on the other hand is a little more unique in his style: he never uses capitals where they should be, outlines conversations like they would appear in a IM chat window, and frequently expresses bold emotions all in caps.

Straight Will Grayson is afraid to feel. His two rules to prevent excessive drama are not to care and to keep his mouth shut. This doesn't help when his best friend Tiny Cooper, who Will describes as "the world's gayest person who is really, really large", is the most emotionally expressive character I think I've encountered. Even though Will likes new friend Jane, he won't allow himself to give in to his feelings and tell her he wants to date her.

Gay Will Grayson is clinically depressed and afraid to trust others and let them get close to him for fear he will ruin a potentially good thing, because in his mind, he ruins everything. When he runs into straight Will's friend Tiny Cooper, he allows himself to feel the attraction that's there (I find it hard pressed for anyone to not like Tiny Cooper), but believes it will all fall apart.

Amidst both Wills trying to find the courage to truly be themselves, Tiny's putting on a school musical about his life in which hilarity ensues and is the main event that everything else really revolves around.

I think a reader's ability to really enjoy this book depends on what they think of Tiny Cooper. He is the one character that sort of bridges the experiences of both Wills and totally steals the show. I personally loved Tiny, I think it's impossible to not fall in love with him: he's flamboyant, funny, and a total sweetheart. Plus Tiny does get some character development towards the end, so he's not a complete stereotype. The book itself, although it does talk about the issues of both Wills, does so with an incredible amount of intelligence and humour. I love how Schrodinger's Cat was worked into a relationship analogy, how awesome is that? My favourite little part was when both Wills IM each other and get into the whole "try-error-try-it" idea, it's wonderfully simple but brilliant at the same time. The writing throughout the whole book is this type of simple brilliance, conveying some universal truths in a geeky, funny way.

Both Wills started to aggravate me at various points. Straight Will has the juvenile idea that pretending not to care will translate to actual not caring, and Gay Will is just really whiny. I know the kid's depressed and taking meds for it, but seriously, like Tiny says, the kid needs to stop focusing on all the crap and try to be happy. Both Wills were very real in that respect, I think when you feel like slapping the characters for acting like typical teenage boys, the authors' have the mindset pegged. I loved Tiny and Jane though, Tiny just for being amazing, and Jane for being the girl that is amazingly perceptive and calls the guys when they're being idiots. I also liked the parents of both Wills, straight Will's mom and dad and gay Will's mom were all very loving and good parents (though straight Will's parents are absent a lot due to their work as doctors), which is nice to see since in most YA the parents of characters are either dead or you're supposed to hate them into the ground.

Recommendation:
Deals with homosexuality, so anyone with issues regarding gay characters might not want to pick this up. For those readers who are a little more open-minded, you'll find a brilliantly written book that's incredibly funny but also explores some typical teenage themes. Plus, I'd almost say this book is worth reading just for Tiny Cooper...yes, I really did like Tiny that much.

Thoughts on the cover:
Considering there's not much you could do on a cover for a book like this (other than maybe some split profile images of both Wills), the lights and random shiny stuff make for a nice cover, that and I like my covers shiny. The lights actually look like those used for stage productions and the like, so I'll pretend they're supposed to be linked to Tiny's play.
Posted by Andrea at 11:53 PM