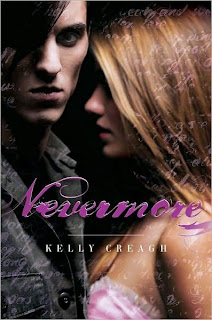 Summary:
From the inside cover:
Cheerleader Isobel Lanley is horrified when she is paired with Varen Nethers for an English project, which is due—so unfair—on the day of the rival game. Cold and aloof, sardonic and sharp-tongued, Varen makes it clear he’d rather not have anything to do with her either. But when Isobel discovers strange writing in his journal, she can’t help but give this enigmatic boy with the piercing eyes another look.

Soon, Isobel finds herself making excuses to be with Varen. Steadily pulled away from her friends and her possessive boyfriend, Isobel ventures deeper and deeper into the dream world Varen has created through the pages of his notebook, a realm where the terrifying stories of Edgar Allan Poe come to life.

As her world begins to unravel around her, Isobel discovers that dreams, like words, hold more power than she ever imagined, and that the most frightening realities are those of the mind. Now she must find a way to reach Varen before he is consumed by the shadows of his own nightmares.

His life depends on it.

Cheerleader Isobel is paired with goth/emo boy Varen for their big English project, and the only reason she agrees to work with him is that she needs a decent mark in English to remain on the cheerleading squad and be allowed to go to Nationals. Both of them make it very clear they want nothing to do with each other, bot once Varen realizes that Isobel isn't a typical cheerleader and Isobel learns that Varen isn't a stereotypical goth boy, they begin to enjoy each other's company while working on their project on Edgar Allen Poe (Varen's choice). As the two grow closer, Isobel notices strange things happening around her: strange figures appearing outside her home, freaky birds outside her bedroom window, hearing her name being whispered around her when no one else is around...it actually escalates to pretty freaky stuff. After having some pretty intense nightmares and finding Varen gone, Isobel learns of a dream world created by Varen's imagination where Poe's stories are terrifyingly real. Her guide, Reynolds, tells her that she has power over this realm since she has a hold on Varen, and therefore, the world her created. Isobel needs to figure out how to control the dream world if she wants to save Varen from his own dreams. I can't say exactly how all this relates to Poe himself (not just his stories) without entering spoiler territory, but the author works Poe in very nicely.

Not only was the plot very engaging and the book well written, the characters really make this story shine. Isobel isn't your typical evil, bitchy cheerleader that you usually see portrayed, she's actually a pretty nice person and is very independent. She knows what she wants and doesn't waver in her determination. She dumps her football star boyfriend Brad when he and Isobel's other friends bully and humiliate Varen, which I felt was really admirable that she stuck up for him that way before she ever really liked him. Varen seems like a freak at first, but aside from being a bit of a loner, he's pretty normal too (aside from his own personal issues, which get explored a bit). Normally in paranormal romances, I either have a beef with the girl being irritating and stupid, or the boy being a bastard and not understanding why the girl likes him at all. I didn't have that while reading Nevermore. Isobel is kind and true to herself, while Varen is strong yet vulnerable, they make a very good pair and I really enjoyed both characters individually and as a couple.

The supernatural element of the story doesn't really come into play until the last third of the book, but when it does it is well executed and actually a little scary too, which was a nice change, a paranormal romance book actually giving me the creeps (thanks to Pinfeathers mostly). The plot relating to the supernatural element was easy to follow and not confusing, and things are left open just enough at the end to follow through in the sequel (Nevermore is the first in a series).

Recommendation:
If you're sick of typical, disappointing paranormal romances, give Nevermore a shot, it just might change your mind about them.

Thoughts on the cover:
Varen and Isobel are exactly as a pictured them. I like how Varen's jacket and Isobel's dress are pictured too (Isobel's dress actually comes into play towards the end of the book). The script across the cover is a nice touch too. And of course the font is purple, with a nod to Varen's purple ink pen.
Posted by Andrea at 6:34 PM